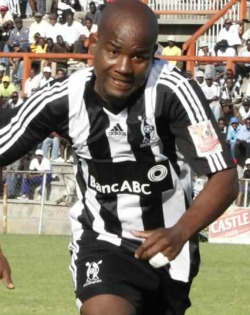 IT’S the last four of the Mbada Diamonds Cup this weekend with favourites Highlanders face Harare City in the first of the semi-finals at Mandava Stadium in Zvishavane on Saturday.
On Sunday, Caps United host How Mine, who knocked out defending champions Dynamos in the quarterfinals, in the second semi-final at the National Sports Stadium in Harare for a place in the final on November 30.
The winners take home a $130,000 cheque- the richest football prize in the land – in addition to an $110,000 subsidy to participate in the Confederation of African Football (Caf) Confederation Cup next season.
Losing finalists will get $90 000 while, for reaching the last four, each team is already assured of $45,000.
Highlanders welcome back coach Kelvin Kaindu and striker Njabulo Ncube.
The duo missed last weekend’s 1-1 league draw away at relegated Motor Action with Kaindu away in England for a Uefa B coaching course while Ncube was suspended.
Kaindu arrived on Tuesday evening and conducted Wednesday’s training session and made the trip to mining town of Zvishavane on Friday with an 18-man squad.
Goalkeeper Munyaradzi Diya also travelled with the team although he has a minor wrist injury.
Ncube is looking for his second silverware in Highlanders colours as he was part of the Bosso team that beat Dynamos 4-3 in a penalty shootout of the Independence Trophy final in 2011 at the National Sports Stadium.
That was the last trophy in the Bosso cabinet and Ncube, as aggressive as ever is determined to, add to the collection.
“We are a big club and deserve something at the end of the season. We will fight until the end to make sure we win the Mbada Cup as well as the league title,” he said.
“The coach has always been telling us that we have to fight hard for something.”
Elsewhere, Harare City are sweating over the fitness of their key players ahead of the match.
Trusted centre-back Crispen Dickson has already been ruled out while Witness Nyamutsaka is also doubtful as he is nursing an injury while midfielders James Jam and Crybert Muvuti are also battling various degrees of injuries.
“We are in a crisis and we pray these guys would have recovered by Friday. This is not the kind of situation that you would want at this stage,” City coach Mawiwi said.Advertisement

“As a coach you are plunged into a puzzle when you have injuries to key players ahead of a crucial match. But we have a bit of an advantage in that we have some depth.
“You will realise that we had been rotating players all season. I believe anyone thrown into the match on Saturday will so their very best.”
For Caps, the dream is still on although How Mine is a mine field after they dazzled Dynamos in the quarterfinals.
Assistant coach Saul Chaminuka says they did not come this far to lose in the semis after they down Motor Action and highly rated Chicken Inn in the last two rounds.
“We have really been playing well and we deserve to reach the final. And I am sure the guys are aware what is at stake; we just have to and once we do that, the cup is ours,” he said.
How Mine coach Philani Ncube, the 2008 Coach of the Year and former Independence Trophy winner, said the pressure is more on Caps.
“We are the underdogs in the match. All the pressure is on Caps and we will play our normal game but we will compete very well,” the former Njube Sundowns coach said.