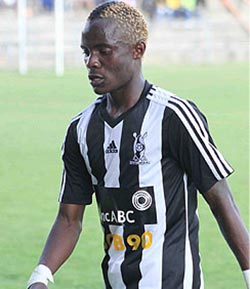 KUDA Mahachi will play his last game for Highlanders this Sunday when they clash with Dynamos in a Castle Lager Premier Soccer League at the National Sports Stadium before leaving for South Africa.
Mahachi is on loan from Absa Premiership side Mamelodi Sundowns, who signed him from Bantu Rovers in January after a stellar performance for the Warriors during the 2014 African Nations Championships (Chan).
Sundowns had exhausted their foreign quota and team manager Peter Ndlovu – a former Highlanders striker- opted to have the player turn out for his boyhood team after another loan spell at Bulawayo neighbours Chicken Inn last season.
Ndlovu, who is in Bulawayo, said all the Sundowns players would report at Chloorkop on Monday to start preparations for the 2014-2015 season.
The pre-season will take them to Polokwane and West Africa.
Mahachi limped off with a shin injury against Triangle last Sunday in a 1-1 draw at Gibbo but coach Kelvin Kaindu said the player has been responding well to treatment.
“He will have to pass a fitness test before we go to Harare but I am happy he is training a bit,” Kaindu said as he prepared for his biggest battle for this season.
Peter Moyo is also set for Mpumalanga Black Aces while Milton Ncube will join Ajax Cape Town, also in South Africa. The duo is likely to wave goodbye to the Bosso family this Sunday.
Highlanders are unbeaten in 11 games and sit on position two with 21 points, one behind leaders Hwange and two ahead of Dynamos, who were humbled 1-0 by Hwange on Sunday and are in fifth place.
Kaindu has not beaten Dynamos in four league matches (two draws in 2012, one loss and draw in 2013) while Highlanders last beat the Harare giants in 2006 when they lifted the league title.
Going into the match, Dynamos have one big problem-their strike-force which has scored 10 times in 11 games while Highlanders have hit the net 20 times with eight of the goals coming from Charles Sibanda (five) and goalkeeper Munyaradzi Diya (three).
Washington Pakamisa, Anesu Gondo (their highest scorer with two goals), Tafadzwa Rusike, Simba Sithole and Patrick Khumbula seem to lack confidence in front of goal and that has led to anxiety from the technical bench.
Dynamos were hoping to register Rodreck Mutuma, who was offloaded by Bloemfontein Celtic, as a free agent but his papers were not in order.Advertisement