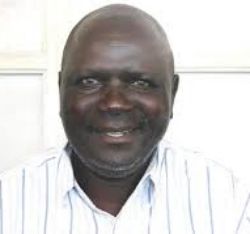 BULAWAYO giants Highlanders have given their new Dutchman coach Erol Akbay a two-year performance-based contract.
Akbay, was installed as coach of Bosso after the club struggled for results last term which saw them finishing in sixth position under Amin Soma Phiri with the Easy Call Cup being the only silverware that they managed.
However, the Bosso hierarchy, desperate to bring back glory days, went beyond the borders in search of a man who can deliver the title and settled for Akbay.
Akbay is however still in his home country waiting for the processing of his work permit papers in accordance with immigration rules.
Highlanders’ chairman Peter Dube told Saturday’s club annual general meeting that Akbay had been engaged for two years on a performance based contract.
He said the coach would resume his duties as soon as he received his papers.
“Erol Akbay’s contract is two years. It is a performance-based contract and he will be assessed in the first year,” Dube said during the meeting.
The Dutchman will be assisted by Amini Soma-Phiri who helped the team survive relegation last year.
Veteran coach Cosmas “Tsano” Zulu has been assigned as the goalkeeper’s coach while Vezigama Dlodlo has been retained as welfare manager.
Commenting on Soma-Phiri and Zulu, the Highlanders boss said: “Having achieved a marvellous turnaround for the team last year, there were reports in the media that Amini Soma-Phiri was reluctant to serve the team. The truth of
the matter is he will be assistant coach to the head coach. The club expects him to use his astuteness to build a formidable team to challenge for honours,” Dube said.
“Due to his experience and maturity Cosmas Zulu has a very important role other than coaching and monitoring goalkeepers. He has a supervisory role on all technical issues in coaching including juniors. Members must appreciate that a new recruit (Akbay) cannot be expected overnight to master all the ropes. We hope Tsano can initiate him into our systems early so he can settle down quickly,” he added.
The two coaches have been building a squad for the 2016 Castle Lager Premier Soccer League season in Akbay’s absence.
A provisional squad of 21 players that include six players promoted from the juniors- goalkeeper Prosper Mathuthu, defender Bukhosi Ncube, midfielders Adrian Silla and Brian Banda and strikers McCarthy Dube and Prince Dube, has already been named.Advertisement

Dube said they were still negotiating with other players as they look to build a strong team.
But they could also lose striker Knox Mutizwa, who is on the verge of signing with South Africa’s Bidvest Wits.