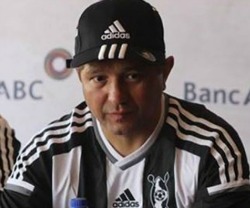 BULAWAYO giants Highlanders recovered from their 2-1 defeat to FC Platinum last week to hammer hapless Triangle 3-1 in a Castle Lager Premier Soccer League clash at Gibbo Stadium on Thursday.
The home side’s defender Guthrie Zhokinyu handed Bosso the lead on the 40th minute with an own goal while Simon Munawa added the second on the 68th with Ray Lunga putting  the final nail on the coffin in referee’s optional time.
Triangle got their consolation through Lameck Nhamo on the 56th minute.
Their coach Taurai Mangwiro said Highlanders match was his worst since he joined the Lowveld-based-side claiming that he was taking the blame.
“This is my worst game at Triangle and l am taking the blame but I want to assure my fans that we are going to avoid relegation and we are going to bounce back to winning ways in our next match” he said.
His counterpart, Elroy Akbay, said he was a happy man before urging his side’s fans to come in their numbers in their next match.
“l am the happiest man after winning 3-1 away from home and l am urging our fans to come in their numbers,’’ he said.
The match started on a low note but Triangle were the first to threaten-launching some dangerous raids.
Highlanders, however, responded with some methodical build ups and Rahman Kutsanzira bossed the midfield.
With the win, Highlanders claimed seventh position on the league table with 40 points.
But their chances of a top four finish are now almost next to nothing.
Advertisement