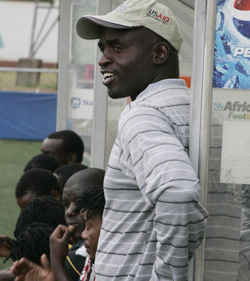 LOG leaders Highlanders face off coal miners Hwange in a top of the table Castle Lager premiership tie at Barbourfields Stadium on Sunday.
The Bulawayo giants have become the league’s early pacesetters after dislodging Hwange from the top of the standings on goal difference.
Both Bosso and Hwange have seven points from three games but Highlanders are on top because of a superior goal difference.
Highlanders started the 2014 campaign on a low note after they were held to a 0-0 draw at Ascot Stadium against lowly Chapungu who bounced back into the topflight league last year.
But Bosso recovered from that set back to hammer Shabanie Mine 4-1 at Barbourfields before a successful trip to Chiredzi where they clobbered Moses Chunga’s Chiredzi FC 3-0.
And as they host Hwange in the fourth game of the campaign, they will be hoping to consolidate their lead at the top of the league.
Hwange have not beaten Highlanders in the league since Kevin Kaindu joined in 2012.
However, the coal miners are aware of the need to continue picking up points.
Hwange started their 2014 campaign on a bright note with a 4-1 destruction of army side Buffaloes before a trip to Zvishavane against FC Platinum earned them a 3-2 victory.
They were however held to a1-1 draw by Triangle.But Hwange coach Nation Dube remains confident.
“It will be a tough match but we are going there with a positive mind. We will take it like any other match,” said Dube.
FIXTURES
Friday:  How Mine v Shabanie
Saturday: FC Platinum v Caps United, Black Rhinos v Chiredzi FC, Bantu Rovers v Chapungu
Sunday: Highlanders v Hwange, Triangle v Chicken Inn,  Dynamos v Harare City, Buffaloes v ZPC Kariba