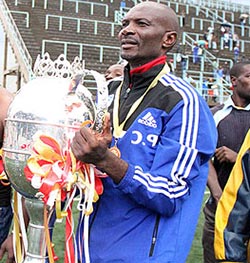 WHEN Dynamos were crowned the 2013 Castle Lager Premier Soccer League champions, it was all celebration as it was title number 20 for the side.
Further, coach Callisto Pasuwa became the first coach to win three titles in a row for Dynamos – all on goal difference from FC Platinum and Highlanders.
Then came the rewards. Dynamos walked away with $70,000. With 30 registered players, each of them Could have hope to get at least $2000. But that is not the case, the players will only share a paltry $28,000, giving each player a possible $900 for 30 games.
Dynamos also received $30,000 for reaching the last eight of the Mbada Diamonds Cup where they were bundled out by How Mine.
How Mine got $90,000 for losing to Highlanders 3-0 in last Saturday’s final and will receive $110,000 subsidy for taking part in next year’s Caf Confederation Cup.
Losing semi-finalists Harare City and Caps United will each get $45,000 with Dynamos, Chicken Inn, Hwange and Buffaloes each pocketing $30,000 for losing in the quarter-finals.
First round losers FC Platinum, Shabanie Mine, Triangle, Black Rhinos and the relegated Motor Action, Black Mambas, Monomotapa and Tripple B banked $15,000 each.
Mbada Diamonds also paid each player $100 appearance fee for every match they participated in while seven members of the technical team were each entitled to $150 for every encounter.
While Dynamos were sharing just $28,000, Highlanders players were given half of the $130,000 prize money they earned for lifting the country’s biggest tournament.
This means Highlanders players will earn around $2000 each for the cup victory in addition to sharing part of the $50,000 for coming second in the league.
How Mine finished in seventh position, but believe it or not, they are richer than the league champions!
They got $90,000 for finishing as runners up in the Mbada Diamonds Cup and will get a further $18 000 from the PSL. This means they have earned $108,000.
The league’s contract with the Delta Beverages expired on November 30 and negotiations for a new deal are already taking place. Delta pours $600,000 into the league each season, and teams are crying foul and demanding better deals.
This is because in smaller countries like Botswana, be Mobile, a telecommunications company is battling to maintain their sponsorship deal, because a competitor has come aboard with better and attractive figures.Advertisement

In Zimbabwe, the only hope is Delta Beverage since the league dispensed with cash rich Econet some few years back when Net One decided to sponsor Caps United as a direct competitor.
The PSL leadership of Twine Phiri, who is facing elections in March next year, should do more for clubs especially in the area of television rights.
Television rights money from Supersport have been kept a closely guarded secret despite a five year deal having been penned last season.
From the 16 clubs that will be in the PSL next season, only two-Caps United and newly promoted Plumtree Chiefs will be individually owned. Highlanders and Dynamos are community owned and 12 are company teams.
Between 2003 and 2013, more than 10 individually owned clubs have crumbled, among them four former champions AmaZulu, Monomotapa, Gunners and Motor Action. Lengthens, Kiglon and Shooting Stars, Tripple B, Eiffel Wildcats, Highway, Hardbody, Underhill and Njube Sundowns have crumbled.