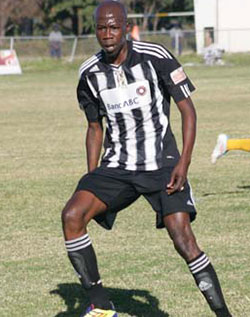 HIGHLANDERS Football Club midfielder Mthulisi Maphosa who allegedly went berserk at a bar on Saturday night and beat up patrons with a baton has been arrested.
Bulawayo police spokesperson Inspector Mandlenkosi Moyo told reporters that Maphosa, 24, was arrested at his place of residence on Sunday.
He, however, said the Bosso star midfielder was not in police custody as they are waiting for a medical report of one of his victims.
“It is not true to say Mthulisi was on the run because he never ran away from the police. He only fled from the scene and was arrested at his house on Sunday morning,” said Insp Moyo.
He said Maphosa would be invited for further investigations and possibly be taken to court once the medical report of an unnamed victim is made available.
“He is on summons waiting for the complainant to obtain a medical report when we could have a picture of the degree of injuries,” said the police spokesperson.
Maphosa missed his team’s match against Shabanie Mine which Bosso won 3-1 at Barbourfields Stadium on Sunday.
His services will however, be needed when Bosso clash with How Mine at the same venue in a must win final match of the Mbada Diamonds Cup this Saturday.
Allegations are that Maphosa assaulted patrons at Esibayeni Bar in Matshobana suburb after a brawl with bouncers who had blocked him from entering wearing a hat.
Witnesses said Maphosa arrived at the bar after 11pm and would not have it when bouncers ordered him to remove his hat for him to enter.
During the scuffle, Maphosa allegedly snatched a baton from one of the security guards and started assaulting everyone.
In October 2011 Maphosa was accused of allegedly stabbing a soldier following a brawl at a social soccer match in Mpopoma and the charges were withdrawn before plea in July last year.
This was after the complainant Isaac Mazambane opted for an out-of-court settlement.Advertisement