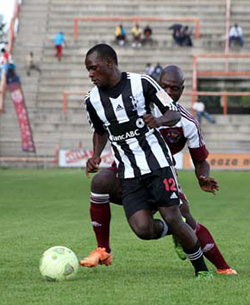 HIGHLANDERS star player Bruce Kangwa won all Castle Lager Premier Soccer League Player of the Month awards for the past three months.
Kangwa, whose stock continues to rise after he decided a fiery contest against Harare giants Caps United in Bulawayo on Sunday with strike 99, won the monthly awards for April, May and June.
He however, shared the April award with FC Platinum’s Obrey Chirwa.
Highlanders coach Erol Akbay also won the April award as Bosso got off to an explosive start under the Dutch man.
Not to be outdone, FC Platinum’s Norman Mapeza won the award in May following another good run.
Dynamos coach Lloyd Mutasa scooped the award in June following a remarkable run after a disastrous start to the campaign under clueless Portuguese coach Jorge Paulo Silva.
However, it is Highlanders’ Kangwa who dominated the awards. His form has attracted attention from watchers of the local game after scoring seven goals in 14 starts which saw his team leaping to the top of the league table with thirty points with a game in hand.
That fine run has seen Kangwa attracting interest from Tanzania where a number Zimbabwean players have been flocking to recently.
The 28-year-old Kangwa has been invited by Azam who are keen to sign him on. He was expected to fly out Tuesday for what his handlers said was more of a familiarisation tour than an audition.
Azam were runners-up to Young Africans in the Vodacom-sponsored 2015-2016 Tanzanian Premier League.
Young Africans are home to Zimbabweans Donald Ngoma and Thabani Kamusoko, both formerly with FC Platinum.
Kangwa’s departure could come as a blow for Highlanders’ title aspirations if he joins the Tanzanian club after Bosso lost last season’s Golden Boot Award winner Knox Mutizwa to South Africa’s Bidvest Wits.