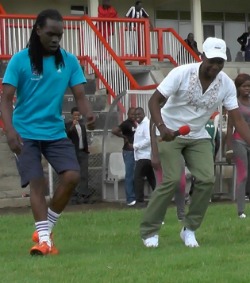 HIGHLANDERS Football Club on Sunday brought down the curtain on their 90th anniversary celebrations with top quality entertainment featuring Kokotsha Makokoba superstar, Clement Magwaza and Harsh touch dance group.
The entertainment, coupled with a thrilling match between Bosso and old rivals Dynamos, turned out to be one of the most memorable events for supporters of both teams who normally engage in skirmishes whenever their teams are playing.
Before the onset of the match, all the ingredients of tranquillity were clearly evident at Barbourfields stadium, the venue of the celebrations.
In a rare show of unity among the country’s oldest teams, Dynamos and Highlanders officials as well as supporters stole the limelight as they joined Magwaza on stage where he was performing the chartbuster, Kokotsha Makokoba.
Dynamos goalkeepers’ trainer, Gift Muzadzi, extremely excelled as he danced to the rhythm of the music. Had it not been for his blue jersey many would have been forgiven for assuming he was one of Magwaza’s dancers.
Not to be outdone, Highlanders technical director Cosmas Zulu joined in. The 68 year old Zulu danced as if he were in his twenties.
Representatives of supporters from the two teams also took to the stage to outdo each other in dramatic fashion.
Despite losing the match to Dembare, Bosso fans and officials continued with their merry making at the Highlanders Club House.
Within minutes, the club house was turned into a sea of blue and white as supporters of both teams joined hands to celebrate the coming of age of Zimbabwe’s oldest team.
While the two sets of supporters have fought running battles sometimes for nothing, on Sunday they indeed showed the power of sports in uniting people.