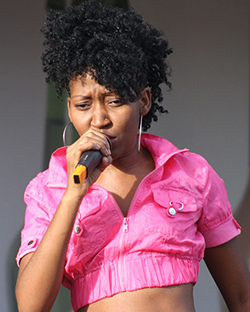 BOTSWANA musician Naledi Kaisara, more popularly known as Slizer, will be in Zimbabwe this weekend together with rhumba artist Franco Lesokwane for a string of concerts scheduled for Harare and Zvishavane.
The duo will perform together with a number of renowned local artists namely Alick Macheso, Peter Moyo, Progress Chipfumo and Blessing Shumba.
Gift Petro, who is coordinating the tour which has been dubbed Zimbabwe meets Botswana, said the Motswana artists were scheduled to arrive in the country on Thursday.
“Then we have a welcome party at Private Lounge (Harare) where Peter and Beverly will perform,” Petro said.
“On Friday the musicians, except Shumba, will perform at Aquatic Complex (Chitungwiza) and Saturday at Caravan Park in Zvishavane.
“On Sunday we have a family show in Harare Gardens where Shumba joins the rest,” he added.
Petro said fans should expect thrilling shows as most of the listed musicians will play songs on their soon-to-be launched albums.
“We promise fans fireworks,” he said.
“Peter and Macheso will be sampling new songs for their albums scheduled for release in September; the same with Slizer who is launching a new album by November while Franco has already released his new offering.”
Slizer and Lesokwane have been in Zimbabwe before and their albums ‘x and x’ made them popular in the country.
The house-kwasa songstress and dance queen, Slizer, who has made it a ritual to come to Zimbabwe at least once a year since 2010, recently made headlines after an alleged adulterous affair with Moyo—claims she refuted.
Naledi kaisara aka SLIZER Bazooker