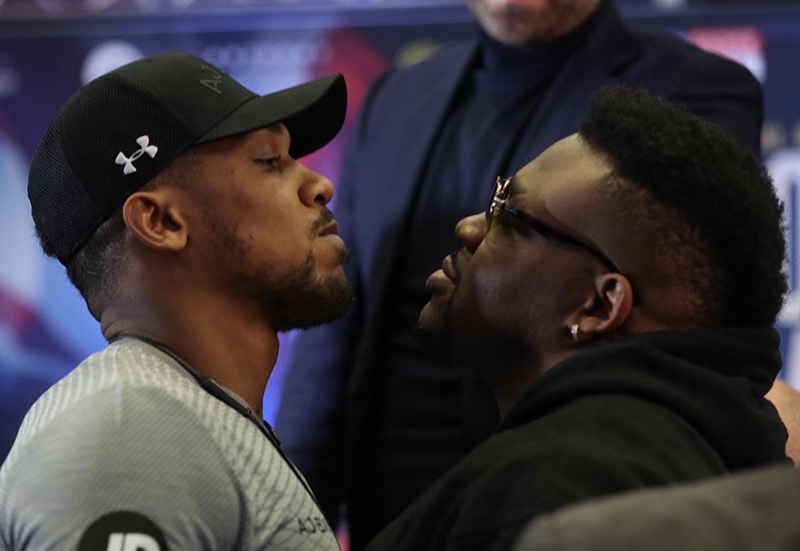 Anthony Joshua has promised Jarrell Miller he will “strip him of his soul” when he defends his world heavyweight titles as he responded to taunts from his US challenger he was a “posh” champion.

British boxer Joshua will fight in the United States for the first time when he defends his IBF, WBA and WBO crowns at Madison Square Garden in the challenger’s home city of New York on June 1.

It will be a clash between two unbeaten boxers, with Joshua boasting a record of 21 knockouts in 22 wins compared to Miller’s mark of 23-0-1, with 20 KOs.

The pair had already held a testy press conference in New York last week, with Miller proclaiming Joshua a “fraud” and “a pussy”.

“I’ve still got 10 years left in the sport,” Joshua said. “I don’t know anything else. I like to knock people out and beat people up.”

Former Olympic champion Joshua has largely avoided the kind of ‘trash talk’ common in the promotion of many boxing bouts but he appeared riled Monday, particularly when Miller said Tyson Fury was now the talk of the British heavyweight scene.

But Joshua said: “I’m going to strip him of his soul in that ring. I’m going to reconstruct his face and his body on June 1.”

Miller, alongside Joshua on a stage at a hotel near London’s Heathrow Airport, said: “I’ve been hearing AJ’s too posh, his nose is up here sometimes.

“For all the underdogs out there who are told they’re not good enough, I’m proof that with one or two cheeseburgers and hard work and dedication you can go far.”

But Joshua insisted he too had known hard times.

“I got banned from the area I was growing up in because I was getting into too much trouble,” he said.

“The state of my hands — this isn’t from boxing, this is from street-fighting. I’ve changed my whole lifestyle around.

Last week Brooklyn native Miller, a former kickboxer, was adamant he would stop Joshua in seven rounds, a claim he repeated on Monday.

“I don’t need to think, I’ll just get it done. You’ve got to go balls to balls. If I ever doubted myself I would not have made it this far,” he said.

“The game plan’s to stop him in seven rounds. You know how I feel about AJ, and my back-story and where I come from and where we’re going.”

After abandoning plans to fight again at Wembley on April 13, Joshua is now trying to break in on the US market where Deontay Wilder, the WBC heavyweight champion and Fury have held sway since their controversial draw in Los Angeles in December.