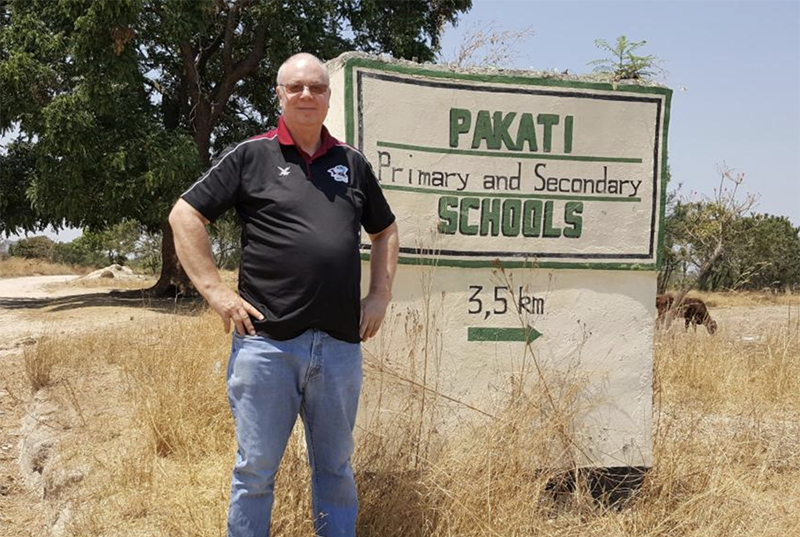 A BRADFORD man who runs a charity supporting school students in Zimbabwe is asking for the city’s football fans to get behind an upcoming fundraiser.

Chris Walker, who lives in Great Horton, runs Friends of Pakati, which donates computers to students in the rural town of Murewa.

Chris is calling on Bradford City supporters to “get tie’d up for Pakati” when the club face Scunthorpe United – his hometown club – at Valley Parade on 23 April.

This will involve fans of either club wearing a shirt or blouse with a tie and a club scarf, and donating £1 each to support the charity.

“I hope both City and Iron fans wear their ties and scarves with pride – whichever team you support – and donate to a good cause.”

Chris moved to Bradford in 1984 to do a teacher training course at Bradford College, later teaching at Royd Mount Middle School in Thornton and Marshfield Primary School.

Apart from two spells abroad and a year in Leeds, the adopted Bradfordian has been in the city “ever since”.

Chris’ first teaching job, however, was at Pakati Secondary School in Zimbabwe, starting in the late 1980s.

He said his time at the school – which, back then, had no electricity or running water – was an “extraordinary experience”.

“I went back to visit in 2018”, Chris explained, “and things had changed, but I asked the head what further developments they would like, and he said they needed computers.

“The school was over the moon about the donations. When I delivered them, the reception was amazing.

“We now want to donate to two or three of the neighbouring schools as well.”

Fans can donate £1 to http://paypal.me/friendsofpakati, then take a picture with their ties and email it to friendsofpakati@gmail.com.

Iron fan David C Scott will also give an additional £1 for each of the first 400 people who donate.