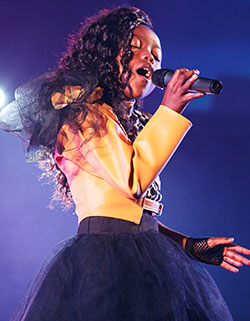 SHE has battled serious ill health since she was just three days old and has already had four open heart surgeries for a cyanotic defect. But 11 year-old Tamara Msimanga is not letting her health challenges define or hold her back.
The talented 11 year-old from Paisley in Scotland is on course to become one of the UK’s youngest singing marvels after she made it through to the Grand Finals of TeenStar, Britain’s only singing competition for young singers, duos and vocal groups.
One of the 28 remaining acts from an initial 9,000, Tamara was the judges’ top act of the day in the Manchester area finals and will now look to achieve her dream at the grand finals set for Birmingham on July 19.
Speaking to NewZimbabwe.com, her mum Michelle said: “Tamara said she is really happy about how far she has come in the competition seeing as it’s her first time.
“She is excited to perform in Birmingham and she was quite chuffed that she was the judges’ top act of the day in the Manchester area finals.
“Tamara would also like to thank everyone who has been supporting and encouraging her and hopes to also encourage other young kids to work hard and follow their dreams.”
With its nationwide status, the TeenStar singing competitions give young aspiring singers, duos and vocal groups all over the UK the opportunity to compete to be the UK’s best TeenStar.
Michelle said she was delighted with her daughter and thanked Zimbabweans and other well-wishers who have supported the brave little girl on her remarkable journey.
ROYALS – LORDE Performed by Tamara