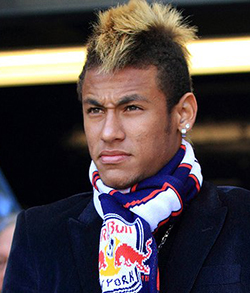 A BRAZILIAN court on Friday froze $47 million in assets belonging to football superstar Neymar over tax evasion allegations surrounding the Barcelona striker.
Judge Carlos Muta wrote in a ruling that Neymar — who is facing fraud claims in a separate case in Spain — had been subjected to a “special fine” concerning alleged unpaid taxes between 2011 and 2013.
“I confirm that a special fine of 150 percent was applied… requiring payment of 188,820,129,25 reals ($47.3 million), of which 63,591,796 relate to income tax and the rest to fines and interest, with regard to events that took place in the calendar years from 2011 to 2013,” Muta wrote.
The court ruling is another blow to the reputation of Neymar, the figurehead of Brazil’s national team.
The 23-year-old is already battling fraud allegations in Spain stemming from the financial arrangements surrounding his move from Santos to Barcelona in 2013.
In June, Spain’s National Court admitted a lawsuit alleging “corruption and swindling” by Neymar, his father and Santos.
The case has been brought by a Brazilian investment fund, DIS, which owned part of the transfer rights for the player when he was at Santos.Advertisement