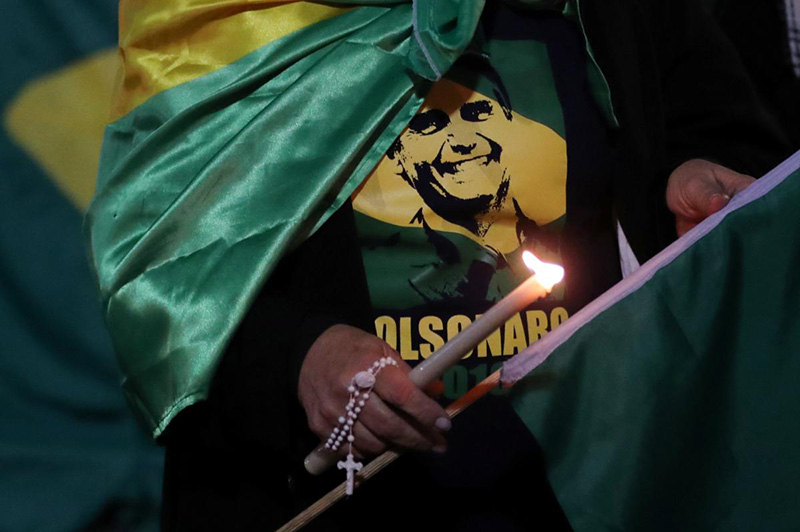 Brazil’s far-right presidential frontrunner Jair Bolsonaro was released from intensive care Sunday after undergoing surgery for complications from a stab wound he suffered while campaigning.

The candidate, who had surgery to remove an intestinal blockage on Wednesday, has been moved to a “semi-intensive care unit,” doctors at Sao Paulo’s Albert Einstein hospital said.

A leftwing assailant stabbed Bolsonaro, 63, on September 6 during a campaign walkabout in the town of Juiz de Flora in southeastern Minas Gerais state.

He suffered deep wounds to his intestines and lost around 40 percent of his blood.

In its statement Sunday, the hospital said Bolsonaro was “on a good clinical path, with no fever,” but that he continued to be fed intravenously.

A video of the candidate walking the corridors of the hospital with the aid of a zimmer-frame (walker), joking with medical staff, was shared online by his son Carlos, a municipal councillor in Rio de Janeiro.

Outside the hospital, a group of about 200 supporters, many of them motorcyclists, rallied in a show of support, waving flags and erecting a giant balloon bearing Bolsonaro’s image.

With the October 7 presidential election just three weeks away, doctors have given no indication of when he might be able to leave hospital.

He was first moved from intensive care on Tuesday, but returned after Wednesday’s surgery to remove what doctors described as a “bowel obstruction”.

Following the stabbing, his campaign managers said he would likely spend 10 days in hospital, but a prolonged stay is now likely.

The former army captain — who has outraged many Brazilians with misogynist and homophobic remarks — is leading polling surveys with 26 percent support, far ahead of his nearest challenger Ciro Gomes.