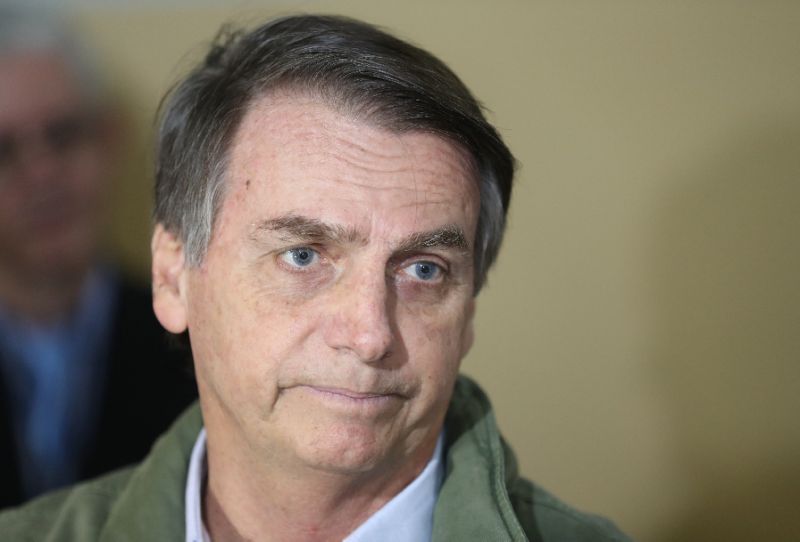 Jair Bolsonaro, who openly admires Brazil's former military dictatorship and shocked many with his derogatory remarks on women, gays and blacks, won 55 percent of the vote in a runoff election
Spread This News

Brazil entered a new era Monday after electing its next president, Jair Bolsonaro, a far-right congressman who vowed a fundamental change in direction for the giant Latin American country.

Bolsonaro, who openly admires Brazil’s former military dictatorship and shocked many with his derogatory remarks on women, gays and blacks, won 55 percent of the vote in a run-off election Sunday — more than 10 points ahead of leftist opponent Fernando Haddad.

Having channeled voters’ anger with corruption, crime and economic malaise, the man dubbed the “Tropical Trump” will now get down to work seeking to “change Brazil’s destiny” — the promise he made in his victory speech.

Markets reacted positively to the win by the business-world favorite, who will take office on January 1 — though profit-taking set in later in the day.

The Sao Paulo stock exchange’s main index opened up more than three percent, after adding 10 percent in a month as Bolsonaro surged in the polls, before falling 2.24 percent into the red at the close.

The Brazilian real hit its strongest in six months against the dollar, then retreated slightly.

After a deeply polarizing election, many Brazilians seem eager to turn the page, hoping for the best as the country takes what even many Bolsonaro supporters acknowledge is a leap into the unknown.

For Bolsonaro’s opponents, however, the bitterness runs deep.

“These elections revealed the worst in humanity. People let out everything they had been too afraid to talk about. It made me feel terrible. But we’ll have to carry on,” said Adriana Calvi, 55.

Bolsonaro, 63, has outraged many with his overtly misogynistic, homophobic and racist rhetoric.

But he vowed in his first interview as president-elect to govern for all Brazilians.

Asked if he would respect the rights of minorities, he asked, “What’s a minority?”

“We’re all the same. I’m no different from you. I don’t care what color your skin is, your sexual orientation, where you’re from, your gender. We’re the same,” he told TV network Record.

“I think if we achieve that equality for all, everyone will be satisfied.”

He appeared relaxed at his home in Rio, where he has mostly remained since leaving the hospital after an attacker stabbed him in the belly at a rally on September 6.

Bolsonaro said he had spent much of the day on the phone, receiving congratulations from world leaders — though some also urged him to “respect democratic principles,” as French President Emmanuel Macron put it.

Opponents have warned Bolsonaro could try to veer toward authoritarianism, after the former army captain heaped praise on Brazil’s brutal military dictatorship (1964-1985) and its torture of leftist dissidents.

Trump tweeted that he had had an “excellent” phone call with Bolsonaro, and Salvini celebrated the fact that “in Brazil too, the people have chased out the left.”

In a sign of how far the “pink tide” of left-wing governments that recently dominated Latin America has ebbed, even Venezuelan President Nicolas Maduro and Ecuador’s Evo Morales — two leftist holdouts — sent their congrats.

The polls came on the heels of Brazil’s worst-ever recession, a staggering multibillion-dollar corruption scandal and a year of record-setting violent crime.

Although many voters expressed strong dislike for Bolsonaro, even more rejected Haddad and his Workers’ Party, which had won the past four presidential elections.

“We are going to change the social-democratic economic model. It’s terrible,” said Guedes, who will head an economy super-ministry under Bolsonaro.

“We need pension reform… and we are going to accelerate privatizations.”

Bolsonaro is due to fly to Brasilia soon to start the transition process with outgoing President Michel Temer, though aides did not confirm the timing.