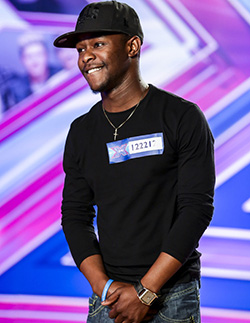 UK X FACTOR hopeful Bre Musiq failed to get a place among Mel B’s boys – but says he is certain “there’s better things to come” after crashing out of the ITV show.
Unimpressed judge and boys mentor Mel told the 24-year-old “he lost everyone” with his rendition of Can’t Take My Eyes Off You by Lauryn Hill on Saturday night’s episode refusing him a place at judges’ houses.
Although Nando’s worker Bre admitted he could have done more with his performance, he believes his music career is only just beginning.
He said: “From my performance on Saturday, Mel made the right decision to not take me through.
“I could have done a lot better, but I did what I did and I can’t change that now. I don’t regret anything.”
The former Ormesby Comprehensive student said he had “the time of his life” on the show and is excited by what the future holds.
He said: “Now it’s about working harder than ever, to keep my name out there and prove to people I can do this.
“I haven’t been out of the recording studio since leaving the show and I am performing as much as I can. I won’t be giving up.
“I never thought I’d make it as far as I did, I got what I needed to from the show and I am going to push myself even harder now.”
Bre, who lives with his mum Barbara McCarthy, 44, a nurse at James Cook University Hospital, and his twin brother and sister Ashley and Ashlyn, nine, near Portrack Lane, Stockton, said he will continue to watch the show.
Bre, who went to Middlesbrough College to study engineering and music, and moved to the area from London when he was 12, said: “Kerrianne is amazing, and she is a really good friend.
“I hope to work with her in the future and wish her all the best in the rest of the show.”
Bre, who was born in Zimbabwe, is well known on the local music scene and headlined the Middlehaven Festival and mimaLIVE.
He has supported acts including Professor Green, DJ Ironik and Tinie Tempah.Advertisement