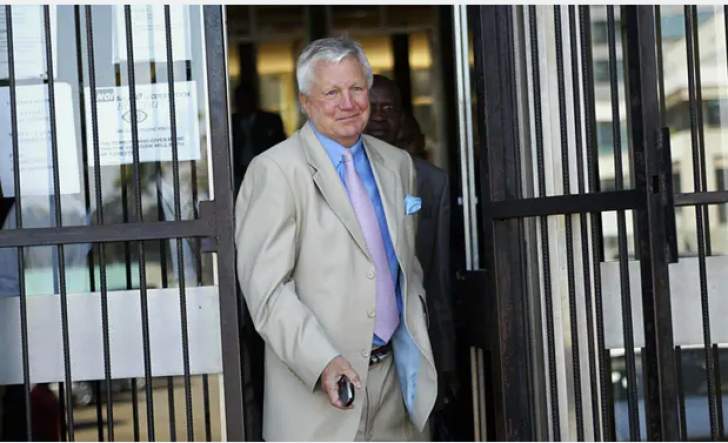 Bredenkamp is famed with captaining the national rugby side in early parts of his life before Zimbabwe’s independence and was once reported to have a fortune of US$850 million from his business dealings in arms, tobacco trading and diamond mining.

“It is with a heavy and sad heart that the president of the ZRU announces the sad passing of our former Sables player and captain John Bredenkamp this morning,” the Zimbabwe Rugby Union (ZRU) said in a statement.

“May his family and friends be comforted during this sad time. The ZRU is at a loss for words on the passing of our former skipper. May his soul rest in eternal peace.”

Although details of his death were still sketchy, sources close to the family revealed that Bredenkamp passed away in Harare Thursday morning due to kidney failure.

Born in Kimberley, South Africa, Bredenkamp moved with his family to the then Southern Rhodesia (now Zimbabwe) while he was still a child. He was educated in Southern Rhodesia at Prince Edward School where he featured for the school’s first team rugby side, the Tigers.

Bredenkamp went on to enjoy an international rugby union career captaining Rhodesia which then featured in the Currie Cup in South Africa from 1965 to 1968.

His sporting achievements were, however, dwarfed by his success in business as he went on to become one of Zimbabwe’s richest persons.

Bredenkamp reportedly amassed a personal fortune of US$870 million from activities such as sanctions-busting on behalf of the Rhodesian regime, tobacco trading, arms sales, and diamond mining in the Democratic Republic of Congo.

He was the founder of Casalee Group of companies, named after his two daughters Caron and Sara, and his wife Lee.

Primarily a leaf tobacco company, it grew to be the fifth-biggest tobacco merchant in the world before he sold it to Universal Leaf Tobacco in 1993. He made the 1996 list of Great Britain’s richest people at number 76. His fortune then was pegged at several hundred million.

Casalee’s industrial arm fronted a massive arms dealing operation which was active in most of the world’s trouble spots.

Bredenkamp was named in a 2002 United Nations report as a key arms trader who made millions of dollars from illegally exploiting natural resources in the Democratic Republic of Congo following a military intervention by Zimbabwe to stop a rebel-led overthrow of the late former president Laurent Desire Kabila.

Despite his former Rhodesian ties, Bredenkamp gained considerable notoriety due to his links with the political and economic affairs of Zimbabwe and is believed to have been a key donor for the ruling Zanu PF party.

Bredenkamp was the subject of United States sanctions targeting people of significant influence within the Zimbabwean government who are accused of human rights violations and economic plunder.

After reportedly quitting arms dealing, he entered the world of sports in 1994, at one point managing the careers of star golfers Ernie Els of South Africa and Nick Price, the legendary Zimbabwean who was ranked the world number one golfer in the 90s.

Sports Illustrated called him “the most mysterious man in golf.”

He was also reported to have come close to buying the English football side Nottingham Forrest in the 90s.