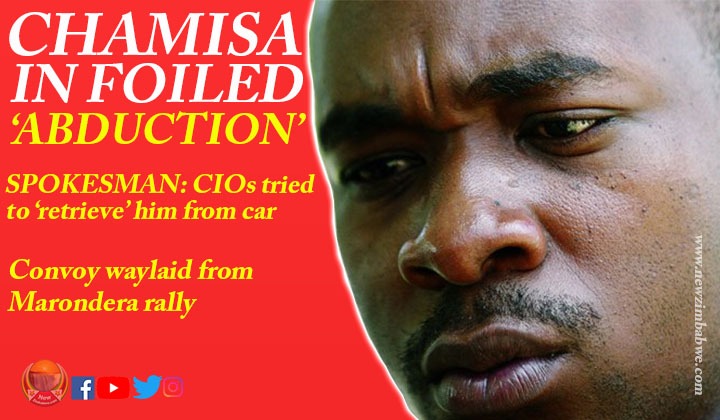 The incident happened near Mabvuku, Harare when the MDC convoy was just returning from a party rally in Marondera.

Some armed persons are said to have waylaid and blocked Chamisa’s car and tried to “retrieve” the opposition leader from his vehicle.

“We had an altercation with the CIO,” Mafume narrated the incident in a voice circulated on social media.

“About six cars followed President Nelson Chamisa’s convoy from Marondera. They then blocked the convoy in Mabvuku, blocked the presidential car, tried to retrieve Chamisa from his car.”

Mafume said the suspected state agents only managed to take one of Chamisa’s security aides who later managed to flee from his captors.

“Our security managed to block them from taking him (Chamisa). They then took one of the security guys in the security team who then jumped out of the car,” he said.

Mafume however said his boss was now safe although saying the attempt to abduct the charismatic opposition leader was the first real attempt on his freedom.

“Today has been their first brazen attempt to actively block the motorcade and interfere with Chamisa’s movements,” he said.

The alleged attack was reported at the Avondale and Harare Central Police stations.

Earlier during his rally address, Chamisa had claimed that he was being trailed by suspected state intelligence officers even when he attempted to visit the toilet.

BELOW: Footage of the alleged abduction attempt