This was confirmed Wednesday in a press statement by Permanent Secretary Presidential Communications in the Office of the President and Cabinet Regis Chikowore.

No reasons were given.

“The Chief Secretary to the President and Cabinet, Dr. M.J.M Sibanda, has announced the termination of employment by His Excellency the President, Cde E.D Mnangagwa, of Dr. Energy Mutodi as Deputy Minister of Government in the Ministry of Information, Publicity and Broadcasting Service,” Chikowore said in his statement.

“The termination which is with immediate effect, is in terms of Section 108 (1a) of the Constitution of Zimbabwe (Amendment No. 20) of 2013.”

“Hon. Mutodi relieved of duties as Dep Minister of Information, Publicity, and Broadcasting Services,” a terse statement by the propaganda ministry on its Facebook page reads.

The flamboyant politician had tweeted; “HE John Pombe Magafuli’s Tanzania now has 630 Covid-19 cases with prayers but without lockdown, while His Excellency President ED Mnangagwa’s Zimbabwe only got 31 cases with lockdown and masks. An insight into how managers can be game changers,” wrote Mutodi.

However, SB Moyo, responding to the tweet, said Mutodi’s remarks did not represent the views of the Zimbabwean government.

Mutodi was unhappy with Moyo’s public rebuke and wrote back saying; “Your public statements which have been sufficiently dealt with by a diplomatic correspondence to the Tanzanian embassy if it mattered, has divided public opinion first on the definition and meaning of government and whether you had become its Prime Minister in charge of the two ministries.”

Earlier on Wednesday, Mutodi had tweeted mocking sentiments about abducted MDC Alliance female activists lying about their ordeal. He was labelled a dog by exiled former minister Jonathan Moyo who challenged Mnangagwa to fire the government official. 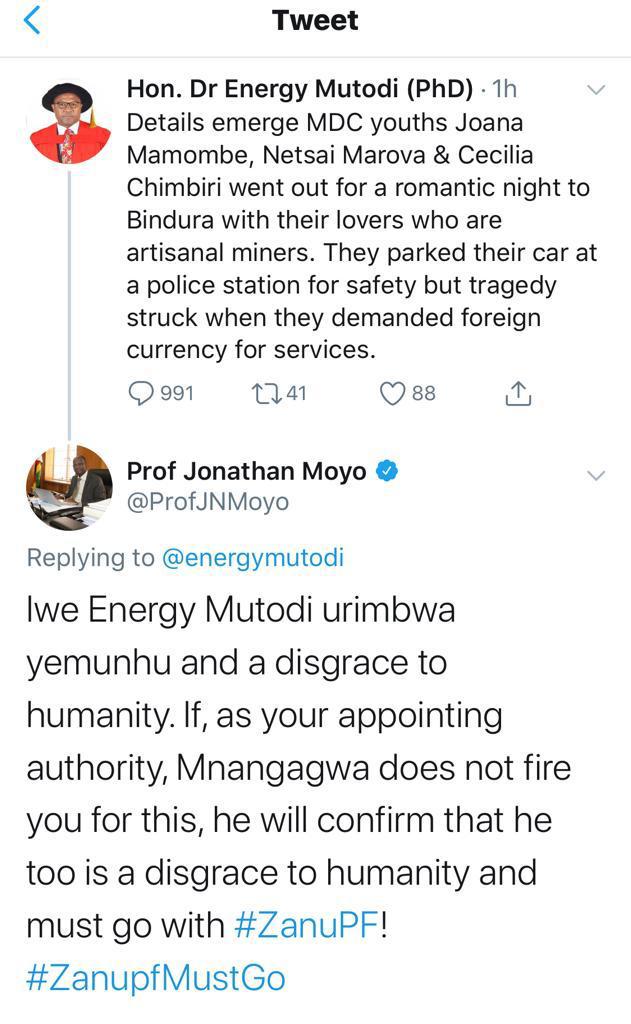 The three MDC members are currently hospitalised after they were abducted at a roadblock and severely assaulted by suspected State security agents. They were found a day later abandoned in Bindura.