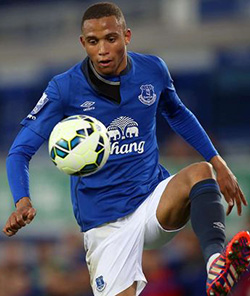 THERE was a collective groan that could be heard across the Mersey from Evertonians when it was confirmed on the eve of the season that Leighton Baines had cruelly suffered a serious injury setback.
However, the fact that the absence of England’s best left-back has not proven a major blow to the Blues fortunes shows just what an impact a certain teenager is having at Goodison Park in his place.
Before the penultimate game of the 2014/15 campaign in May, Brendan Galloway – brought to Everton as a centre-back – had never even kicked a ball in the Premier League.
But Galloway’s progress has been so marked that Roberto Martinez now faces a genuine selection dilemma when Baines returns to fitness.
One man in the game who has been aware of Galloway’s talent from an early age is Kenny Swain who coached him with the England Under-16s side.
A native Merseysider, Birkenhead-born Swain, who as a player won the League Championship and European Cup with Aston Villa, said: “The pace of Brendan’s development is probably the thing that surprises most people.
“Improvement can be slow or it can be quite rapid but that can be dictated quite often by an opportunity that arises or some faith given to you by a manager.
“They’re the obstacles that you hit and you don’t know what to expect.
“Brendan has obviously impressed at Everton and the fact that he was so coachable will probably have gone down well with all the staff.
“It doesn’t surprise me that given this early opportunity, he has done well.
“He might have had to have waited a bit longer for his chance elsewhere but he’s taken it and that’s testimony to the work he’s put in.”

The big time … Brendan Galloway talks to manager Roberto Martinez
The boys Don good
Galloway became MK Dons’ youngest ever player in November 2011 when he came on as a substitute for an FA Cup tie against Nantwich Town while still a schoolboy.
Swain reveals that the future Evertonian was just one of several players at the Buckinghamshire club on his radar.
He said: “I was tipped off by Arsenal to take a look at some of MK Dons Under 14s.Advertisement

“They had a group of players including Dele Alli and Brendan and I think we gave opportunities to four or five of their boys.
“There were was a ruck of players there who were all prospects as far as I was concerned and we gave them a chance.
“It’s difficult when you’ve got the whole country to choose from because there are a lot of prospects and you’ve got to give them the right opportunity at the right time.
“All credit to Mike Dove and his staff at MK Dons and Karl [Robinson] for giving him his introduction to the first team.
“I saw the potential when they were about 14 years of age and Brendan was one of those boys.”
On the move

Grabbing his chance … Brendan Galloway (left) in action against Spurs