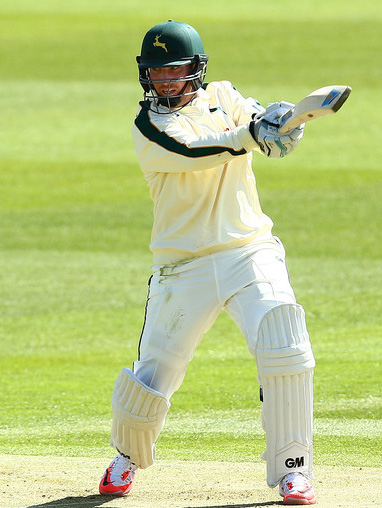 BRENDAN Taylor is used to experiencing culture shifts on and off the pitch.
The 29-year-old signed a three-year deal with Nottinghamshire this summer after leaving his native Zimbabwe – a country where democracy has been a foreign concept under Robert Mugabe.
Now he lives in England, where millions took for granted the right to a free and fair election only last week.
On the field, he left his international career behind after the World Cup to embrace a new challenge with Notts – and now he is excited by the prospect of experiencing the other extreme of domestic cricket on these shores.
He has already excelled in the quintessentially English County Championship, racking up two centuries in front of the ultimate cricket traditionalists.
And now he is primed to play under the Trent Bridge floodlights in front of an expected 10,000 plus crowd as Notts Outlaws host Birmingham Bears in the NatWest T20 Blast curtain raiser.
It is surprising that one of the world’s most respected players has never played in the Big Bash, the Indian Premier League or the Champions League. With that in mind, Taylor says he can’t wait for the game as he settles into life in Nottingham seamlessly.
“I’m looking forward to the T20 a lot. It’s going to be the biggest domestic tournament I’ve played in,” he said.
“It’s very new to me and you hear a lot of good things back in Zimbabwe about it. It’s a very high standard.
“It keeps getting better and better. With the big names coming in, it holds it in good stead and there are plenty of good quality English players to make it very entertaining.
“I’m really excited. It’s been great here so far. I settled in straight away, couldn’t ask for a better place.
“I think it’s totally different living in Harare compared to Nottingham, third world vs first world.
“Zimbabwe is still a wonderful country to live in. The lifestyle is still great.
“You are faced with daily challenges but we’ve become accustomed to it. You come over here and everything works like clockwork.
“I’m pretty spoilt to be here. I’ll never take playing at a place like Trent Bridge for granted. I never take anything for granted and I’m privileged to be playing in a fantastic Test venue.”
Advertisement

Taylor has three centuries in five first-class games for Notts. As he says though, he is certainly not taking his own form for granted.
He is modest about his efforts, although the fact he spoke to the Post after an extended net session highlights the fact there is more to it than blind luck and favourable conditions.
When asked about his start to the season, he said: “The weather has been pretty kind and wickets were playing quite nicely. It’s gone better than I expected, but our preparation has been very good and I’ve felt comfortable in this environment.
“I was ready to go out and try to perform. I think I ticked all the boxes before I came over here in terms of trying to prepare mentally having heard so many good things about Notts.”
Taylor’s run of form extends beyond his arrival in the East Midlands.
He scored two centuries and a 50 in the World Cup, he retired from internationals on a high after playing 167 ODIs for Zimbabwe, having made his debut as an 18-year-old in 2004, when the national team was in disarray.
He admits he is unlikely to keep scoring five centuries every six games, but is determined to make hay while the sun shines.
“Mentally you’ve got to try and take it one game at a time. Every time you’re at training you’ve got to try and take something from it,” he said.
“Let the result take care of itself and know you’ve given yourself the best chance to perform at your peak. You can’t always guarantee success.
“There’s plenty of cricket left in the season so if I hit a bad patch I’ll be determined to get that right.”
This article was originally published by Nottinghampost.com