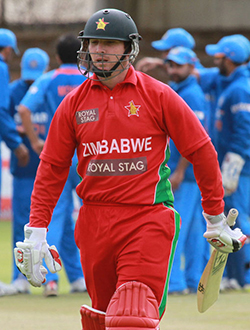 THERE are cricketing careers, and then there is that of Zimbabwe’s Brendan Taylor, who has seen more of the best and worst of cricket than men twice his age.
At the age of 18, Brendan Taylor made his international debut for Zimbabwe. He joined a red-raw team, hit by the withdrawal of 13 of its established white players in a political protest against selection policies and facilities.
In this third appearance, Zimbabwe were bowled out for 35, which remains the worst score in ODI history. Just before his 19th birthday Taylor won his first international match, in his 18th game.
While still a teenager, he played in a Zimbabwe team that was bowled out twice in a single day by New Zealand. The defeat was so embarrassing that soon after, the national board suspended the team from five-day cricket.
Nevertheless, aged 21, he played in the first World Twenty20 and hit 60 from 45 to defeat Australia.
He spent his early and mid-20s schlepping around Holland, New Zealand and Bangladesh, looking for club cricket. Often, he made limited-overs cameos for Zimbabwe, but pay and conditions were a lottery.
He was 25 when, in 2011, Zimbabwe resumed playing Test cricket. He captained the side on their return, scoring 71 and 105 in a big win over Bangladesh. Later that year, he broke the record for the most runs scored in a three-match ODI series, with 310 against New Zealand.
He was named as 12th man in the ICC’s team of the 2015 World Cup, after scoring 433 runs in six innings.
At the tournament he announced he was swapping intermittent international cricket for Zimbabwe for the stability of a three-year deal with Nottinghamshire, and moved to England. He is still some months shy of turning 30.
Motivation for England move
While few players have had their careers so dictated by forces beyond their control, fewer still have emerged with their love of the game unbroken.
When looking out at the rain drenching the grass of Trent Bridge on a horrible day in early May, Taylor is warm and open, but also fidgety. His fingernails are bitten down, he picks and pulls at his training top.
Paradoxically, given how often we hear of the intensity of the calendar wrecking players and the flux of his career so far, the motivation behind Taylor’s move to England is to play more, not less, cricket.Advertisement

“I started getting mentally stale in Zimbabwe,” he says. “I didn’t dislike anyone; I just felt everything was moving very slowly.”
“A couple of years back a few counties expressed some interest, but I was very dedicated to cricket for Zimbabwe. I still am, but I felt that I would better myself as a player by joining Notts.
“Cricket is about trying to maximise yourself as a player and be as good as you possibly can be. I’ve been saying for a number of years now that Zimbabwe has not been playing enough cricket.”
County cricket is already providing a contrast; Taylor was several games into his Notts career before he had time to buy a phone and open a bank account.
Taylor’s emphasis on maximising his ability is apt, as his career has been built on self-reliance. As a talented teenager he trained with a Zimbabwe national team that featured senior players such as Heath Streak, Murray Goodwin and the Flowers – Grant and Andy.
He hoped for the chance to learn and flourish under their tutelage. Instead, in 2004, the country’s leading white players went on strike, in protest at the Zimbabwe Cricket Union’s attempt to introduce a racial quota to team selection.
Taylor was called up and faced a difficult decision: either to take to the field as the sole white man in the team, or strike and risk sabotaging his international career before it had even begun.
Difficult decision

He spoke to his father, and the pair agreed he would play.
“I wasn’t involved with them [the striking players], so I didn’t understand where they were coming from. I was young and I wanted to play for Zimbabwe,” he explains.
“There wasn’t any tension between races or colours [in the dressing room]. I was there to play cricket regardless of whether the team had 11 whites or 11 blacks.”
Nevertheless, it was clear to Taylor that the board wished to promote cricket as a black sport; selection “wasn’t a level playing field”.
This fact is confirmed by Alan Butcher, who coached the team from 2010-13 and who, even years later, remembers a group that forever “felt they were one game away from being dropped”. Perhaps they were; there were persistent rumours of corruption.
In addition to questionable selections, the young team lacked the discipline to succeed at international level, and Taylor said he supported the board’s decision to withdraw the team from Test cricket in 2006.
“For me and many others it was very difficult. We found ourselves in situations as batsmen where we might get to 50 against Australia or India, but would then find a way to get out.
“We never had a senior batsman to bat with or a senior bowler to bowl with, so basically it was sink or swim.”
Without the bedrock of the five-day game to anchor tours around, securing fixtures became more and more difficult.
“We would start playing cricket, find some momentum, and then we stop playing for three or four months and go back to the nets again,” says Taylor.
“It was an uphill battle, especially when you see the other teams around the world churning out 30-40 ODIs a year, 10-15 Test matches and 10-15 T20s. We were probably playing a tenth of that.”
The pivotal year for Taylor was 2007. Under the leadership of Robert Mugabe, the government’s economic management deteriorated further. It’s printing of money generated hyperinflation and a collapse in the value of the local currency.
Zimbabwe Cricket, which hitherto had paid players in US dollars, could no longer afford to do so, and switched to paying in worthless Zimbabwean notes. The livelihoods of the players – like those of everyone else – disappeared almost overnight.
Against the board’s wishes, Taylor took the major step of leaving the country in search of games. He wound up playing club cricket for Utrecht, in Holland. The money was nothing special, but the conditions were new and the games were regular.
And at the end of that year, he scored that rapid 60 as Zimbabwe chased down 139 to beat Australia at the World Twenty20. For the first time, his name was noted outside of his home country.
No quick fix

Nevertheless, there was no quick fix. When Butcher arrived as coach three years later, he found a team down on its luck and out of confidence. He went to a team meeting during a tour of the Caribbean and was not impressed.
“It lasted about 20 minutes and I saw 15 pairs of eyes staring into the floor,” Butcher said. “They weren’t engaged, they weren’t expected to have an opinion. They were just talked at for 20 minutes by the coaches.”
Nor was Taylor flourishing. “He didn’t cover himself in glory on our first trip, as he missed a training session after a night out. He was undisciplined, not a very good professional.”
Yet the new regime soon had an effect. Taylor credits Butcher with creating the best conditions that the team had experienced, and he began to make some runs.
Games were arranged against Australia A and South Africa A, and in 2011, Zimbabwe played its first Test match in six years.
Despite the board’s preference for a black captain, Butcher gave the role to Taylor, and he responded with two big innings. From there, Zimbabwe went straight into games against Pakistan and New Zealand. More time on the field brought rapid improvements to a rusty team.
But then the fixtures dried up again. Several proposed tours were cancelled, the board’s finances deteriorated and there were few viable games in the Future Tours Programme.
Lack of games
As Taylor recalls, “Other teams would know 12 or 18 months in advance who they were playing.
“We were trying to find cricket and were trying to find teams that had a two-week window and could fit in three ODIs very quickly.
“So you would go off to play a bit of club cricket and then, boom, there would be a new schedule. There was a lot of flying in and out and trying to be in multiple places at once.”
After two matches against a full-strength New Zealand team, Zimbabwe didn’t play another Test for over a year.
Indeed, in the four years since they returned to Test cricket, Zimbabwe have managed just 14 matches. By contrast (and this is probably not ideal either), England are playing 14 between April 2015 and January 2016.
Of the team’s decline, Butcher says simply and sadly, “Everything we gained in 2011 was thrown away because we just didn’t play any cricket.”
Zimbabwe Cricket roused itself again prior to the 2015 World Cup, appointing former captain Alistair Campbell as managing director and Australian Dav Whatmore as coach.
But, in a familiar refrain, it was all done too late and in too much of a hurry.
Whatmore had four weeks to prepare his new charges. Taylor, who captained Zimbabwe at the tournament, described the preparation as “poor”, and was unable to keep the frustration from his voice.
“I think we were excellent in every game we played – for 80% of the time. For the other 20%, we were horrific.
“We had good teams, like South Africa, at 80 for 4 [83] after 20 overs, but they ended up getting 340. We batted well early on, but we tended to lose wickets in groups or at crucial times.
“Those little passages of play saw them take the game away from us.”
The team won one match and failed to qualify from its group. For Taylor, it was a bruising experience.
“That extra fielder in the ring has made it hard for teams and captains to control the opposition’s momentum.”

But there was the personal highlight of scoring a century against India in what was his final match for Zimbabwe.
Taylor smiles at the memory. I ask him what it feels like to score a century at the World Cup.
He refuses to crack, saying, “It was very rewarding, but because of the results, very disappointing at the same time.”
I believe him. He is not being falsely modest. He ended the World Cup a weary captain, struggling against a set of all-too-familiar problems.
So far, Notts appears to have been a much-needed tonic. He scored three hundreds in his first four matches, despite his professed rustiness against the red ball.
I ask Taylor what he wanted to achieve for the rest of his career.
“Just team success”, he replies.
This did not feel like a line out of the media manager’s handbook. After all, as Taylor explains, “I won a handful of games with Zimbabwe over 11 years.
“We beat some really good sides, but the number of victories was minimal.”
The career that he has willed into existence has contained several personal highlights, but few that had the whole dressing room jumping.
He has three seasons in the Midlands to change that, before he assesses his options again. Given the battles he has already won, it would be unwise to bet against him.
This article was first published in the June issue of All Out Cricket magazine.