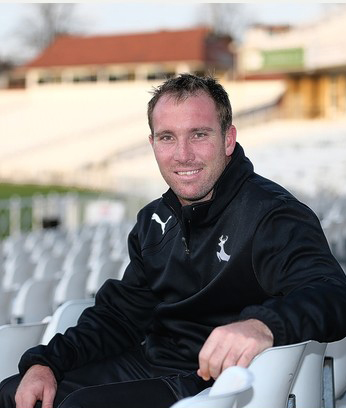 BRENDAN Taylor says he has a new lease of life after signing a three-year deal with Nottinghamshire.
The 29-year-old quit international cricket after the World Cup, stating the need for a new challenge following 23 Tests, 167 ODIs and 26 T20 games for Zimbabwe.
Notts won the race for his signature in what initially looked like it may be a short-term move to Trent Bridge as a Kolpak player who is arguably at his peak.
However, he insists he is here for the long haul as he targets silverware, something he admits is somewhat alien to his countrymen.
“There was interest from other counties but with Notts being a successful side at a Test ground it made sense to be a part of this,” he said.
“I spoke to people who said you can’t go wrong with Notts. To win silverware would mean a lot.
“For Zimbabweans over the years, silverware is not something we’re used to. If we win something it will be fantastic.
“There were a few events that unfolded about eight months ago which made me decide to retire from internationals. Maybe I became a little stale as a player.
Frustrated but passionate
“I was frustrated in the environment but very passionate about playing for Zimbabwe. I felt stagnant and felt a county move would help my cricket.
“Fortunately a very good side like Notts had some interest. I feel like I’ve got a new lease of life here.”
Taylor, who is unsure what number he will bat for Notts, has been thrust straight into the grind of an intense county season, but he is embracing the challenge.
“I’ve expected it will be a lot of work but we are very lucky to do the job we love,” he said.
“As a Zimbabwean we’ve always cried out for more cricket so there will be no complaints from me.”

He probably needs no further incentive to make a good impression ahead of his debut, but making his first ever appearance at the home of cricket would be one.
Notts start their campaign in Division One of the County Championship at Lord’s in four days against Middlesex with Taylor admitting he has work to do getting up to speed with batting in early season English conditions.
“I’ve never played at Lord’s. I’ve always wanted to tick that box so it will be special for me,” he said. “I’ve played a lot of white ball cricket of late. I’m trying to adapt quickly.Advertisement

“I would have liked more time facing red balls but I’m trying to cash in with (assistant coach) Wayne Noon.
“It’s a big change mentally and technically but I’ve been playing for a while so hopefully I can adapt.”
Familiar faces
The Harare native represents the second Zimbabwean to play for Notts, following in the footsteps of Paul Strang.
He will see at least one familiar face in the dressing room in the shape of Riki Wessels, who he played alongside him for Mid West Rhinos.
“I’ve known Riki for a long time and (second team captain) Paul Franks. They’re a humorous bunch of guys in the dressing room,” he said.
“It breaks the ice straight away. They’re very welcoming and I couldn’t be happier.
“It’s early days but I feel like I’ve known the guys for a long time.”
Despite landing in England with little time to spare before the start of the season, Taylor should be full of confidence.
He scored 138 in his final innings for Zimbabwe against India last month and admits it was the perfect send-off as he prepares for a new challenge.
“It was a nice way to go out. It was special for me but as a team we struggled in the World Cup,” he said.
“Knowing that Notts had me on board meant I could enjoy my last bit of international cricket and express myself.
“It probably contributed to some success. It was a wonderful feeling to go out on a high even though it was sad. I’m only looking forward now though and not backwards.”