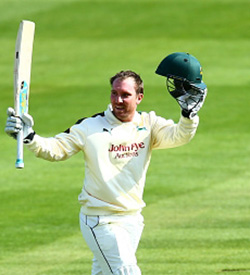 ZIMBABWE batsman Brendan Taylor marked his Championship debut for Notts with a century as they reached 298-9 on the first day against Middlesex at Lord’s.
Taylor, who played in 23 Tests and 167 one-day internationals before quitting international cricket to join Nottinghamshire on a three-year Kolpak contract, looked an inspired signing as he justified captain Chris Read’s decision to bat by constructing a composed hundred off 160 balls with 14 fours.
The 29-year-old made the most of the chance.
He said: “I’ve always wanted to play at Lord’s so it was very rewarding and very pleasing to get some runs in my first innings here.
“It’s just day one out the way and there’s still a lot of cricket left in the game so hopefully we can complement the total we get with some very good bowling tomorrow.
“We had to fight hard in the first two hours against quality bowlers like Steve Finn and Tim Murtagh who made it very difficult for us. It was nice to get through that tough passage and build on from there.”
Taylor was one of three new faces in the Notts XI, having arrived on a three-year contract, joined by South Africa seam bowler Vernon Philander and former Gloucestershire all-rounder Will Gidman.
And he shared a third-wicket partnership of 108 with namesake James Taylor (36) after Steven Mullaney was bowled off the inside edge by Tom Helm for 22, having previously been dropped twice off the same bowler, and Alex Hales run out without scoring.Advertisement