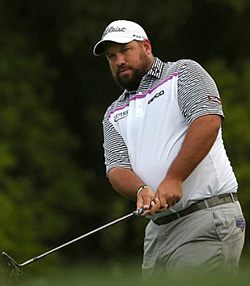 BRENDON de Jonge coped with demanding conditions to earn a one-stroke lead over five players after the second round in the PGA Tour event in Florida on Saturday (AEDT).
On a day when Australian Adam Scott’s impressive cut streak ended amid poor putting, his former Presidents Cup team-mate edged to the front with a 2-under-par 69 at Innisbrook Resort in Palm Harbor.
After benign conditions on Friday, a stiff breeze provided a sterner test for the second round, but de Jonge proved up to the challenge as he notched four birdies to post a 6-under 136 halfway total.
De Jonge, the 2012 Zimbabwe Sportsman of the Year, described conditions as tricky and said he did not want to get too excited about his position.
“It’s one of those courses it’s tough enough to get it on the fairway when it’s still and then when the wind blows it’s added difficulty,” the world number 86 told Golf Channel.
“I feel like my game’s in good shape at the moment. It’s just a matter of putting four rounds together.”
World number three Henrik Stenson (70) and Australian Open champion Jordan Spieth (67) were among a group one stroke behind, while first round leader Brian Davis (76) plunged five strokes off the pace.
At least Davis made the cut, unlike Scott, who missed a series of short putts with a regular-length putter to shoot 75 and bow out early, ending the longest active cut streak on the PGA Tour.
Scott had been in the money for 45 consecutive events on the PGA Tour (and 57 worldwide). The last time he missed a cut was the 2012 Byron Nelson Championship in Texas.
The 2013 Masters champion reverted to a regular putter last week after four years using a long putter, a move made with an eye towards the ban on anchoring the club against a player’s chest that will begin on January 1.
Scott and de Jonge were team-mates on the International team at the 2013 Presidents Cup. But while Scott has 11 victories on tour, de Jonge has never won in 220 starts.
Others to miss the cut included defending champion John Senden and South African Ernie Els, who was somewhat fortunate not to get injured when an iron struck a tree trunk on his follow-through and snapped in half at the 16th hole.Advertisement