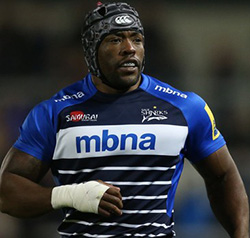 UK: SALE Sharks prop Brian Mujati says he is determined not to let his side’s unbeaten home record go to waste.
Sharks have yet to taste defeat at the AJ Bell Stadium in Aviva Premiership Rugby or the European Rugby Challenge Cup this season and should they keep that form going, could find themselves in the semi-finals of both competitions.
They face Montpellier in a Challenge Cup quarter-final on Friday and the 31-year-old former South Africa international is determined to keep their home record intact.
He said: “At Northampton Saints we went a whole league season perfect at home and then we lost in the semi-finals.
“So at the end of the day for Sale it’s about getting to the play-offs and taking it from there. Although that’s another story for another day.
“Right now we’re trying to stay in Europe.”
Mujati, originally from Zimbabwe, has experience of French Top 14 rugby having played at Racing 92 for two seasons from 2013.
He joined Sharks last summer and expects the clash with Montpellier, currently second in their domestic league and on a six-game winning run, to be a bruising encounter.
“I’m expecting them to be quite physical, with a big squad and I think they’re going to test us everywhere.
“The bottom line is they’re a big French team and I don’t think they’re going to disappoint us on Friday night.
“This is probably our biggest game of the season with the strongest opposition we’ve come across. As a professional how can you not get yourself ready for something like this?
“It’ll be a good challenge and I think it’s easier to play in these sort of games than perhaps against lesser teams, because you don’t want to let yourself down.”
Sale come into the game on the back of two Aviva Premiership wins, having lost their previous two, and Mujayi is happy for attention to switch to European action with the spectre of a crucial double-header with Bath Rugby on the horizon.
Sharks play Mike Ford’s men twice in five days next week and are fighting it out with the likes of Harlequins and Northampton Saints for a spot in next season’s Champions Cup.
Mujati said: “We haven’t really looked too much into the league right now. We’re concentrating on this game on Friday.
“It’s difficult because we’ve been through a tough period, playing Leicester and so on, losing a couple of games, so we trained really hard to win at London Irish so we could build a bit of confidence going into this game.Advertisement

“I think we’ve done that so if we can get through this game then we can see what happens next week.”