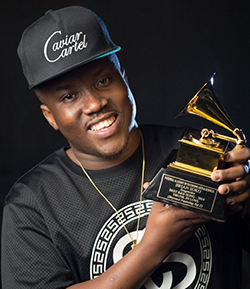 HE is taking the music industry by storm and already has a Grammy to his name. Until a year ago, Brian Soko wasn’t used to being recognised by the wider public nor was he familiar to a lot of people, unless you scoured through the list of credits of some of your favourite r‘n’b and hip-pop records.
Soko is part of the production collective, The Order. They are the talented producers behind some of the hit songs of the biggest stars in the game such as Beyonce, Kendrick Lamar and Nicki Minaj. The work on Minaj’s album, The Pinkprint, earned them another Grammy nod at this year’s awards.
In 2015 Brian Soko became the first Zimbabwean, and one of a handful of African artists to receive the most prestigious award in music for Drunk In Love.
Drunk In Love was one of the biggest tracks of 2014 and critics commended its appeal to urban radio. It peaked at number one on the US Hot R&B/Hip-Pop songs chart and number two on the US Billboard 100. It also reached the top ten in more than five countries including France, Ireland and the UK.
That was not the only accolade Brian received last year. He also won the coveted International Music Artist of the Year Award at the Zimbabwe Achievers Awards. Battling against four other global hitmakers that included Tinashe Kachingwe and Hope Masike, Soko edged out on top.
With the 6th Edition of the Zimbabwe Achievers Awards fast approaching, Tidi Kwidini caught up with the award winning producer to talk about this year’s nominees, hit records and his plans for 2016.
TK: Tell us a bit about yourself, who is Brian Soko, the side that nobody really knows?
Soko: My name is Brian Soko; I am a 25-year-old Music Producer from Zimbabwe. I was born in Tshovani, Chiredzi and moved around a lot when I was younger, some of the places include Masvingo, Harare, Kwekwe, Mutare, Chinhoyi and Lusaka before moving to the States at 14. When I left Zimbabwe one of my dreams was to become a pro-golfer. However, golf was too expensive in the States so I stopped and focused on my other passion – music.
TK: How old were you when you first knew that music is what you wanted to do?
Soko: I knew I wanted to be involved in music full time when I was 14 or 15. I didn’t find my calling (producing) until I was 16. At this age I wanted to be a rapper but my mother brought me back to reality when she offered a sobering view about the hip-pop industry. I remember her saying that the likes of Eminem had stories, what was mine, and from that day, I focused on producing instead. I made my first beat and stopped rapping that same day. Advertisement