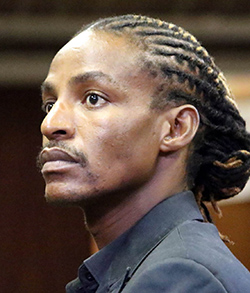 SOUTH Africa: Kwaito star Sipho Ndlovu, popularly known as Brickz, has been sentenced to 15 years in prison after being found guilty of raping a 17-year-old relative in 2013.
In his ruling Magistrate Baloyi detailed testimony from the victim that she was bleeding after the incident as her hymen was broken, as she was a virgin at the time, and was in severe pain.
Baloyi said the victim had been told by Brickz to take a bath after the rape and had threatened to kill her if she told anyone. He also said the victim was unaware that she had been infected with a sexually transmitted disease.
The victim said she wanted to end her life as a result of the trauma and became fearful of the musician.
The defence argued for a lenient sentence, but Baloyi said Brickz has not shown remorse for his crime and the court has a duty to protect the freedom of women.
Wearing grey pants, a white shirt and a blue jersey, Brickz was all smiles as he walked into court to hear his fate.
He has maintained his innocence throughout the trial and has repeatedly said “the truth will come out.”
Brickz’ legal team immediately said it would be appealing the conviction as well as the sentence.
Advertisement