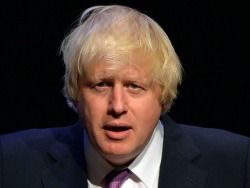 AFTER almost four decades in power, Robert Mugabe’s vice-like grip on Zimbabwe seems to be slipping. There have been public sector strikes and street protests. The economy is shattered and the state coffers are empty, the government struggling to find funds even to pay security forces that shore up a calamitous regime. And the doddery 92-year-old despot is being deserted by key allies with calls for his departure amid a savage internal battle to succeed the President.
The latest sign of waning control came last week with a statement by war veterans attacking him as dictatorial and egocentric. For decades, these former comrades who led the disastrous seizure of white farms were the people so quick to defend Mugabe with violence. Now they claim they regret keeping quiet while citizens were abused, condemning suppression of free expression and accusing their President of corruption. “This rot needs to be uprooted, and right now,” they said.
Time to ask Boris: Why has Britain been supporting Mugabe’s regime?
For all the hypocrisy, few sane people would disagree. We can presume this includes the Foreign Secretary Boris Johnson, since last year he wrote a punchy article condemning Mugabe’s monstrous misrule. He accused the Zimbabwean leader of turning a prosperous nation into one of the poorest on the planet. So perhaps now he might like to ask his new officials why Britain has been leading international efforts to shore up this repressive regime?
For our government has been promoting a plan to refinance the debt-ridden Zanu-PF government, which would ensure it can borrow money again to fund its torturers and baton-wielding police forces. They have been pushing a package to pay off $1.8bn arrears to multilateral donors, which would allow Zimbabwe to take out emergency International Monetary Fund loans. So forget the savage brutality and billions stolen by senior figures: Britain is backing a bailout for Mugabe – and when he might finally be on the brink.
The future under this regime is not rosy
This shameful plan is led by British diplomats and officials in the department for international development chanting the tired old mantra of stability over respect for human rights or support for brave opposition figures fighting a brutal regime. “This is not a question of signing a blank cheque,” said one central figure involved. “They will be forced to impose monetary stability. The alternative is to say that we will walk away and watch as the whole place explodes.”Advertisement

There are justified fears of implosion, which might impact on the wider region. The country has suffered drought, falling commodity prices and chronic cash shortages, leading to delays in payment of salaries to police, soldiers and teachers. There has been a “stay-away” general strike led by a churchman, the biggest act of public defiance against Mugabe in a decade, plus violent demonstrations. One group of protesters even stormed a plush hotel in fury at the vice president staying there since 2014, accusing a supposedly broke government of profligacy.
Yet the state’s failure is down to shocking mismanagement, with the future far from rosy under this regime. Just 700,000 people have formal jobs, fewer than at independence in 1980 when the population was half the size. Since Mugabe stole the 2013 election, enabling his party to regain full control after a four-year coalition, the state payroll has doubled to reward followers. An unsustainable 82 per cent of public spending now goes on public sector salaries while corruption remains rife.
In comes Britain
With even war veterans turning against him, insiders say the increasingly frail President is feeling alarmed. “Mugabe is a very worried man,” disclosed one source, saying the President fears betrayal by long-term allies. “He has even told his aircraft engineers to make sure his plane is well serviced and ready to fly.”
So what a strange time for Britain to back up Mugabe. No doubt the aim is to regain influence in a former colony as China slows bankrolling of the regime. There are also local suspicions Britain is backing a faction led by Emmerson Mnangagwa, a bloodstained former spymaster nicknamed the Crocodile, in the three-way fight for succession against Mugabe’s wife and a former vice-president.
And the US is not happy
An infuriated Washington rightly fears a fresh injection of funds will only prop up Zanu-PF in power and help it to purloin the 2018 presidential ballot. “It seems strange London is doing this when Mugabe is on the ropes,” said one well-connected figure. Earlier this year Bob Corker, chairman of the Senate foreign relations committee, warned new lending to Zimbabwe could “entrench the very same individuals responsible for the country’s economic collapse and gross human rights violations”.
Britain remains far too ready to do deals with despots despite a torrent of smooth words about democracy, development and fighting corruption. You might have thought aiding Mugabe would be beyond the pale – but apparently not. “They are being so naive in playing the same game as always: stability at all costs, even if that means backing a dictatorship like the one we are suffering here,” said one human rights source in Harare.
Our blinkered diplomats ignore the likes of Tendai Biti, who salvaged the economy as coalition finance minister after the second-worst hyperinflation in world history. ‘Britain is selling the ordinary man and woman down the river by backing a regime that cost so many lives in Zimbabwe,’ he told me. ‘What the British are doing has no moral legitimacy – a Western government that thinks it knows best for Africans. It is appeasement. Shame on the British government.’ But does Boris still agree? Or has he suddenly changed his mind on Mugabe, a man he once called a tyrant?
This article is taken from i News