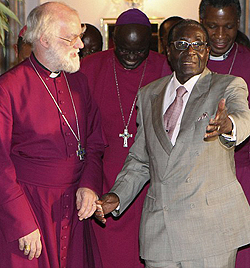 PRESIDENT Robert Mugabe’s expressed willingness to re-engage Western countries on the outstanding matters of contestation despite their belligerent behaviour is comforting and exhibits traits of a seasoned and matured statesman.
The diplomatic tiff with Britain was mischievously amplified and put on steroids to become a European Union matter against Zimbabwe. The political contestation over compulsory land reform, which was later upgraded to be a matter of human rights and rule of law, was simply a dispute between a former master and former colony. To put it simply, the disagreement emanated from outstanding or parked issues from Lancaster House.
The land issue can no longer be a matter of discussion because it has already mutated to be an irreversible reality, as also conceded by MDC-T in 2009. It is inconceivable to imagine driving off 500,000 indigenous farmers and replacing them with 3,000 white farmers. It would be indeed unconstitutional to do that in terms of the current people-driven constitution.
Britain has its most businesses in Zimbabwe than any other African state. The Zimbabwe business models, technology and thinking are largely influenced by the British system. The sanctions have made it difficult for British businesses to consolidate and expand their business interests as trade with Zimbabwe was criminalised. This has led to several businesses setting up shop in South Africa, Botswana and other Southern African countries.
De Beers has relocated its diamond sorting and selling department from 17 Charterhouse Street in London and relocated it to Gaborone. This move helps De Beers dodge British trade restrictions imposed by the European Union on Zimbabwe and also able to deal with any other source country without the encumbrance of these sanctions.
So, these sanctions have also affected British and European businesses who otherwise wish to access Zimbabwean resources. Asian countries are quickly replacing many EU countries as economic powerhouses. Dubai’s diamond silk route is feasting on the barring of European businesses from accessing Zimbabwean diamonds.
It is on the public record that the British government is keener to engage than before. This was expected. Many EU countries have realised that Britain internationalised a bilateral matter and they blindly followed and denied themselves an opportunity to do business with a country that ranks in the top 20 in the world on resource per capita index.Advertisement

I bumped into the UK’s Deputy Ambassador, Chris Brown, last week and was amazed by the extent of how his mission has climbed down from ‘regime change’ to ‘let’s engage’ mode. Brown is one of the UK’s young diplomat commandos who are deployed to “trouble spots”. He was posted to Zimbabwe after serving in Iraq where he completed a regime change there.
What I picked from him is that reality is now slowly sinking in that Zanu PF is going nowhere and he is going through the pains of accepting that. The African Union must provide this young man with serious counseling to cope before he breaks down. I, however, admired his courage when he said that 10 Downing Street has worked well with Zanu PF in the past and that romance can be rekindled.
Re-engaging with the UK now – as President Mugabe has said – is most ideal as Zanu PF has cast its position in stone with respect to the twin policies of Indigenisation and Land Reform.
UK businesses have never requisitioned these sanctions and fear that if Mugabe reciprocates, their interests will be affected. So, they are equally keen to have the sanctions lifted and trade allowed to occur unrestricted. So who is resisting the removal of sanctions?
President Mugabe is not only just an international brand but has become a source of massive income for many in civic society. If the UK government and the political oligarchy normalise relations with Mugabe, more than 2,000 NGOs will close in Zimbabwe. Crisis Coalition, formed to create a crisis, is now broke.
The reason why Zimbabwe has the largest western-funded NGO than any other country in the world is to do with creating platforms and avenues to unseat President Mugabe. That explains why there are more NGOs in Zimbabwe than in Iraq, Syria and Afghanistan combined.
These NGOs will exert so much pressure on the British parliament not remove these sanctions. It is as selfish as it comes.
The express approval for Zanu PF’s UK branch by the British government this past week is comforting and warms up to re-engagement. Zanu PF must now set-up a massive secretariat in London and intensify its anti-sanctions campaign.
There is no doubt many young black businesses would want to partner with UK businesses than any other investors. Language and business culture is the same. The willingness to re-engage the British by Mugabe must be seized by the British business community to come here and trade or invest with us as equal partners. The current UK Ambassador must stop her diplomatic activism and sober up.
At his inaugural speech, President Mugabe intimated that indigenisation would be customised to balance with the interests of investors especially in the manufacturing sector.
I have deliberately focused on the UK because the moment relations with Zimbabwe are normalised through the unconditional removal of sanctions and expressing the will to cooperate, its cousins like Canada, Australia and USA will fall in line.
After fighting against the leadership of President of Dos Santos for decades in Angola, the United States later turned around when it realised that its puppet, Jonas Savimbi, was a clown and the incumbent was the real deal. History is now repeating itself.
Tafadzwa Musarara is the chairman of Resources Exploitation Watch. He can be contacted through e-mail: musarara@rew.co.zw