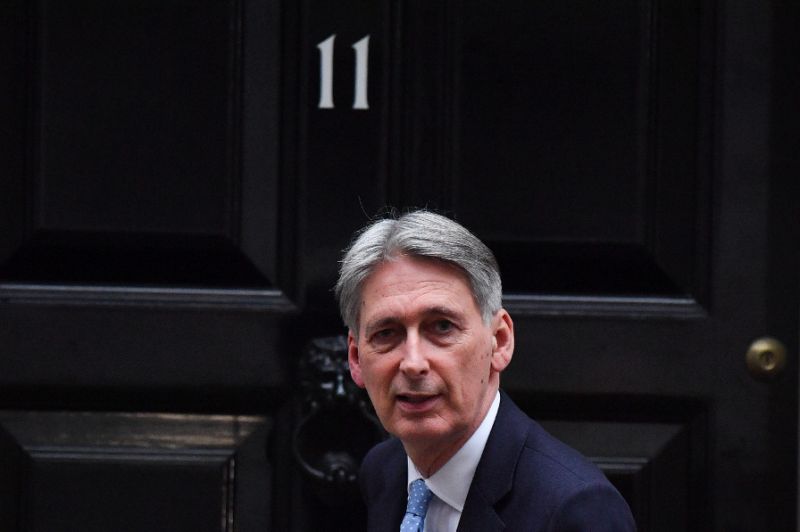 Hammond's Treasury ministry said that over the next 15 years, Britain would take an economic hit from leaving the EU in any circumstances
Spread This News

Britain will be economically worse off in any scenario outside the EU, the government said Wednesday, as the Bank of England warned that a no-deal Brexit would trigger a financial crisis.

The government’s plans for post-Brexit ties with the European Union would still cost the economy around 3.9 percent of gross domestic product over 15 years, a government report found.

Finance minister Philip Hammond said the departure deal agreed Sunday between Britain and the EU was the optimum way to minimise the cost of leaving the bloc.

The report comes as Prime Minister Theresa May took the divorce deal to a sceptical Scotland, where the fishing industry is concerned about EU access to British waters.

May has less than a fortnight to convince hostile MPs to back the deal in a December 11 vote and avoid plunging Brexit into chaos, four months from Britain’s March 29 departure date.

The report does not exactly model for the deal struck with Brussels, the outlines of which remain vague.

But it found that a reduction in EU immigration would cost the economy more than the current free movement rules.

However it leaves the bloc Britain’s GDP will taper, even accounting for the new trade deals it will be able to sign, including with the United States.

But May told lawmakers in parliament: “This analysis does not show that we will be poorer in the future than we are today…

“It shows we will be better off with this deal.”

Opposition to the deal struck with EU leaders earlier this month has raised concern about the possibility of Britain crashing out of the EU with no agreement.

The Bank of England on Wednesday said such a scenario would trigger a financial crisis in which the pound would plunge by 25 percent and house prices would fall by 30 percent.

“Our job is not to hope for the best but to prepare for the worst,” Bank of England governor Mark Carney told reporters.

Labour main opposition leader Jeremy Corbyn told May should “accept the reality” that parliament would not back the deal.

“It’s not hard to be the best deal, if it’s the only deal,” he said. “By definition, it’s also the worst deal.”

Hammond insisted that the economy was not the only consideration and controlling Britain’s borders, money and laws also had value.

“We have to look not only at the economy but the need to heal a fractured nation,” the chancellor said.

“There will be a cost to leaving the EU because there will be impediments to our trade. What the prime minister’s deal does is absolutely minimise these costs,” he told BBC radio.

May runs a minority Conservative government and opposition parties, as well as many of her own MPs, are against the deal.

Some Brexiteers think it keeps Britain shackled too closely to Brussels, while pro-EU lawmakers think the terms are worse than staying in the bloc and want a second referendum.

Jacob Rees-Mogg, a Brexit backer who is waging a Conservative leadership challenge to May, accused the central bank of trying to “create panic”.

An online Survation poll of 1,030 adults for the Daily Mail newspaper found that 37 percent supported the deal — up 10 percent on November 15 — and 35 percent opposed it, down 14 percent.

If MPs do reject it, Hammond said the government would “consider very carefully how to proceed” through “uncharted political territory”, by studying which MPs voted which way.

Having spent Tuesday campaigning in Wales and Northern Ireland, May used her visit to Scotland to emphasise that Britain would leave the EU’s Common Fisheries Policy after a transition period scheduled to end in December 2020.

“At long last, we will be ‘an independent coastal state’ again — taking back full sovereign control over our waters, and free to decide for ourselves who we allow to fish in our waters,” May said.

Scottish fishermen are furious they will have to continue obeying EU rules during the transition period, including much-despised quotas and allowing European vessels access to British waters.