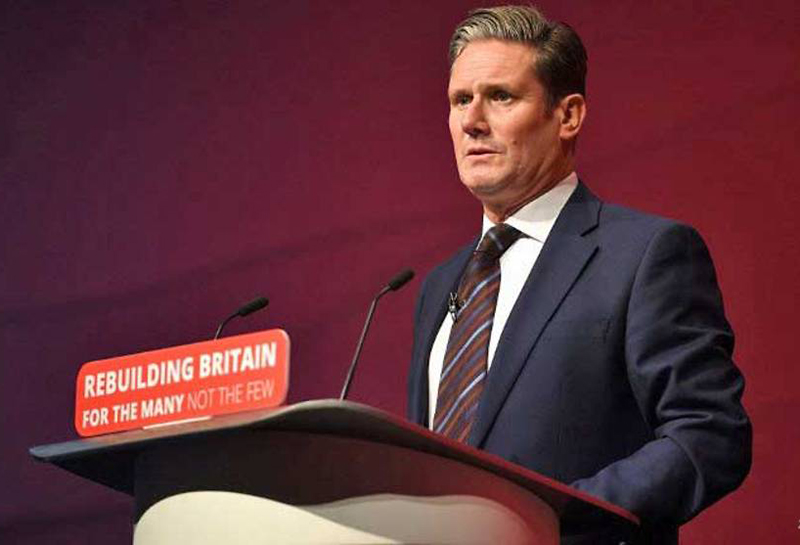 A key figure in Britain’s main opposition Labour party said Tuesday that remaining in the European Union should not be ruled out if there is a second Brexit referendum.

Brexit spokesman Keir Starmer told the left-wing party’s annual conference that campaigning for another vote on Britain’s relationship with the EU should be an option.

“It’s right that parliament has the first say” on any Brexit deal the government strikes with Brussels, he told delegates in Liverpool, northwest England.

“But if we need to break an impasse, our options must include campaigning for a public vote — and nobody is ruling out Remain as an option,” he said, to huge cheers and a standing ovation in the hall.

The comments were not in the official script of his speech, which would have been approved by the party leadership.

Labour is attempting to bridge its Brexit divisions during its conference.

Many young, metropolitan, newer members vociferously oppose leaving the EU, but older, working-class voters from the party’s traditional heartlands are in favour.

Labour leader Jeremy Corbyn, a long-time sceptic of the EU, has so far tried to maintain ambiguity on the subject while allowing the Brexit process to tie the government in knots.

Starmer said Labour wanted a general election as a first recourse in a bid to break any Brexit deadlock in parliament.

However, if that was not possible, other options must be kept open, including campaigning for a second referendum.

Starmer said that if Prime Minister Theresa May struck a divorce agreement that did not match Labour’s expectations — something he said “seems increasingly likely” — then it would vote against the deal in parliament.

May’s centre-right Conservatives can only muster a slender majority in the House of Commons so it may only take a few rebels on her own side to bring down the deal.

“We do not accept that the choice is between whatever the prime minister manages to cobble together and no deal. That is not a meaningful vote,” Starmer said.

“If parliament votes down the prime minister’s deal or she can’t reach a deal, that is not the end of the debate,” he said.

Ruling Conservative Party chairman Brandon Lewis said of Starmer’s speech: “He has refused to rule out delaying Brexit, refused to confirm Labour would end freedom of movement, and opened the door to staying in the EU with a second referendum.

“Labour’s promises on Brexit aren’t worth the paper they’re written on.”