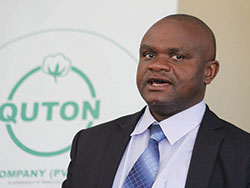 BRITISH investor Limagrain Groupe is expected to increase its shareholding in seed producer SeedCo to 32 percent by year end.
Limagrain plans to inject $27 million into the business to help clear the firm’s borrowings, an official said on Wednesday.
SeedCo chief executive officer Morgan Nzwere told The Source after the group’s annual general meeting that the fresh capital would ease the burden of finance charges.
Borrowings have gone down by 23 percent to $35,8 million due to the capital injection arising from the issue of five percent shares to Limagrain as well as early payments by the government of Zimbabwe, the company said.
“The second tranche of the equity from Limagrain totalling $27 million is expected before December,” Nzwere said.
“This will increase their shareholding to 32 percent. This tranche will help with the reduction of finance charges through liquidation of borrowings.”
He said SeedCo has also recovered $16 million from its debtors since its year end in March.
Nzwere said demand for winter wheat seed remains flat, reflecting the problems besetting the sector.
“Demand for winter cereals seed remained flat with increases in wheat being offset by reduction in barley owing to the main customer holding carryover stocks.
“The problems affecting cereal production in Zimbabwe remain, with sustainable winter cropping funding and reliable electricity for irrigation (being) the major challenges,” he said.
The group also will reduce its exposure in cotton seed business Quton after engaging a new technical partner at equity level by September, Nzwere said.Advertisement