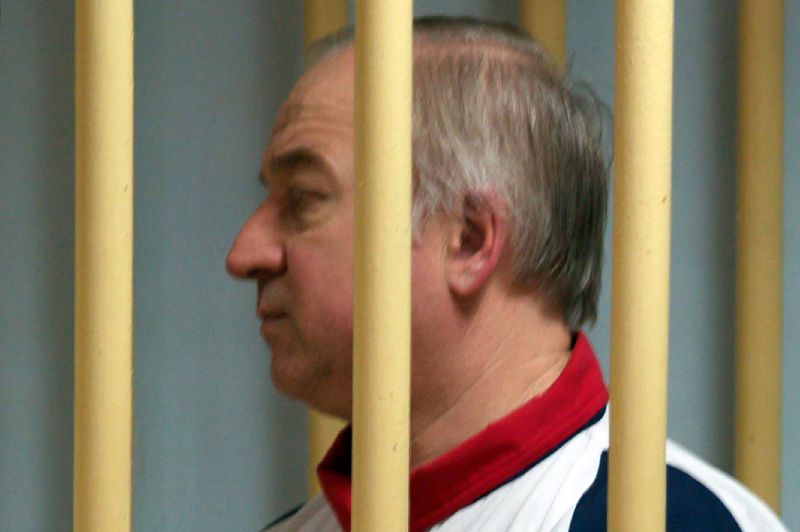 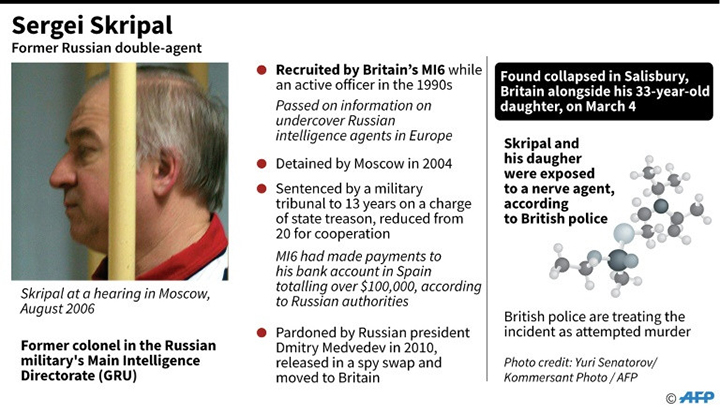 British detectives were scrambling Thursday to uncover who poisoned a Russian former double-agent and his daughter with a nerve agent, as doctors battled to save their lives and that of a policeman who also fell ill after coming to their aid.

Sergei Skripal, 66, who moved to Britain in a 2010 spy swap, is in a critical condition in hospital along with his daughter Yulia after they collapsed on a bench outside a shopping centre on Sunday.

The brazen poisoning in the southwestern English city of Salisbury is already being linked with Russia by British politicians and the media, sparking an angry response in Moscow.

On Wednesday, British police confirmed for the first time that a nerve agent was used and that their probe was now an attempted murder investigation.

“Sadly, in addition, a police officer, who was one of the first to attend the scene is now also in a serious condition in hospital,” Metropolitan Police assistant commissioner Mark Rowley told reporters.

Scientific tests by government experts have identified the specific nerve agent used “which will help identify the source”, he added, declining to reveal the exact substance.

“The feeling is that he is not going to make it out of this,” the source told the newspaper. “I think it could be more positive (for Yulia). They are hopeful that she might be able to pull through.”

The paper added that the police officer’s condition was thought to be “less severe”.

Other emergency services personnel who treated the pair required medical treatment at the time but have not been admitted to hospital.

Police say they are keeping an open mind about what happened, but Foreign Secretary Boris Johnson has alluded to Russia.

He noted the “echoes” with the 2006 poisoning in London of former Russian spy and Kremlin critic Alexander Litvinenko, which Britain has blamed on Russia.

Moscow accused British politicians and journalists of whipping up anti-Russian sentiment, with Kremlin foreign ministry spokeswoman Maria Zakharova telling reporters the story “was straight away used to boost an anti-Russian campaign in the media”.

Meanwhile, hundreds of counter-terrorism detectives are working “around the clock” to create a timeline of the victims’ movements, with “many hours” of CCTV under review, police said.

Investigators believe Skripal and his 33-year-old daughter were in Salisbury city centre for several hours before they were found slumped on a bench.

They reportedly had lunch at a pizza restaurant, Zizzi, and visited a pub in Salisbury before being discovered outside the shopping centre, where onlookers said they appeared “out of it”.

An anonymous witness who was in the pub, which has been closed by police, told the BBC on Wednesday that Skripal was there behaving erratically and at one point shouting loudly.

Rowley appealed for information from those in Salisbury on Sunday.

“Your memory of that afternoon and your movements alone could help us with missing pieces of the investigation,” he said.

The Times reported police are probing whether Skripal’s daughter, who arrived in Britain from Moscow last week with “gifts from friends”, may have inadvertently brought the nerve agent into the country.

The paper previously said investigators would also examine the 2012 death of Skripal’s wife from cancer, and that of his 44-year-old son last year in St Petersburg, reportedly from liver problems.

Prime Minister Theresa May was updated on the case at a meeting of her national security council on Tuesday, but has declined to publicly comment on the ongoing investigation.

However, she confirmed the government might consider a boycott by British officials and dignitaries of the 2018 football World Cup in Russia if it were found to have been involved.

The possible boycott — which would not include players — was first raised by Johnson on Tuesday, when he told MPs that he was not pointing fingers for Skripal’s collapse but made several references to Russia.

He warned Britain would respond “appropriately and robustly” if a government was found responsible.

The prince has attended recent tournaments in his role as president of the English Football Association.

Kensington Palace, his residence, did not respond to a request for comment.

Skripal was a former colonel in Russian military intelligence who was jailed in his country for betraying agents to Britain’s MI6 secret service.

He was pardoned before being flown to Britain as part of a high-profile spy swap involving Russia and the United States in 2010.