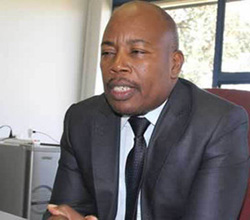 RADIO legend and sportscaster, Admire Taderera, has suffered a major stroke which left him partially paralysed, family members confirmed this week.
Taderera was said to have suffered the stroke on December 19 last year and is unable to talk.
He is understood to be undergoing rehabilitative treatment at a Harare hospital.
“His condition has slightly improved since the stroke before Christmas but he cannot talk and one side of his body is paralysed,” a family member was quoted as saying in local media.
“We are encouraged by the fact that you can still that there is life in him and we hope God will restore him to health.”
Taderera, one of the big names at the state-run Zimbabwe Broadcasting Corporation (ZBC), joined the privately owned StarFM as general manager when it was established in 2012.
He however left the struggling company in October last year after being accused of running down the radio station which reported huge losses.
“It seems Admire was affected by developments at Star FM. He was stressed,” said another family member.
Before joining StarFM, Taderera had worked for the ZBC as a radio presenter, DJ and executive for 21 years from 1986 to 2007.
He is also an experienced sports commentator.Advertisement