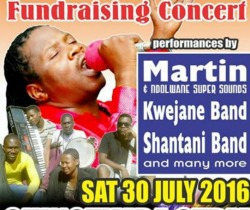 ZRP’s Criminal Investigation Department (CID) in Matabeleland North province has organised a fundraising musical gala in Victoria Falls as it seeks to raise funds for fighting crime.
The ill-equipped ZRP which has lately fallen out of favour with Zimbabweans due to allegations of corruption and numerous road blocks has now roped in musicians to try and win people’s hearts as it seeks to raise funds.
Posters advertising the show slated for July 30 have been pasted around Victoria Falls and Hwange as the CID seeks to raise funds towards fighting crime.
The fundraising concert will feature Martin Sibanda with his Ndolwane Super Sounds group, a band that’s popular in Matabeleland and Midlands regions, Victoria Falls-based Sungura outfit Kwejani Band and Shantani among others.
The concert is being organised by CID in conjunction with Business Against Crime and the Crime Consultative Committee (CCC).
CCC provincial chairman Christopher Mazibisa said the concert will be used to raise money but couldn’t be drawn into giving details as he referred questions to the CID’s Detective Sergeant Ndlela who is organising the event.
“Yes I am the provincial chairman but talk to the CID as they are the organisers,” said Mazibisa.
Det Sgt Ndlela couldn’t be reached.
According to the posters, the show will be at Chinotimba Stadium where adults will pay $2 while kids will pay $1 to enter.
Government has oflate been failing to pay the police and the army on time.Advertisement