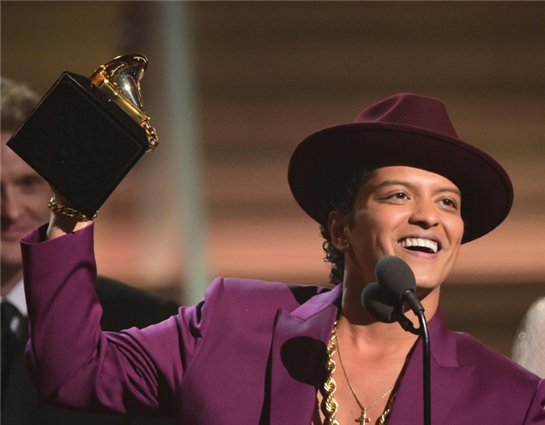 BRUNO Mars, whose slew of hits made him one of the most successful pop stars before taking a brief hiatus, returned Friday with an unapologetically retro party anthem.
The funk-pop artist released “24K Magic,” the first single off an album of the same name to come out on November 18.
A feel-good song about enjoying a night out with women, “24K Magic” carries echoes of early Janet Jackson with a heavily synthesized and readily danceable beat.
Mars summed up the sound of “24K Magic” when he announced it on Instagram, writing: “You can call it my first single, but I call it the invitation to the party.”
The singer and multi-instrumentalist from Hawaii, who turns 31 on Saturday, became a fixture on Top 40 radio with his last album, 2012’s “Unorthodox Jukebox,” which took on a funky pop feel reminiscent of 1980s hit music.
With his song “When I Was Your Man,” Mars became second only to the late Elvis Presley in the speed with which he achieved five number-one hits on the US singles chart.
Mars also notably featured on the viral hit “Uptown Funk” led by Mark Ronson which came out in late 2014. He performed the song in February at the Super Bowl, the most-watched annual event on US television, in a halftime show led by Beyonce.
But “24K Magic” marks the first solo work by Mars since “Unorthodox Jukebox.”Advertisement