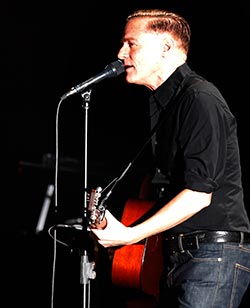 CANADIAN soft-rock star Bryan Adams’ sold out show went ahead in Harare on Friday despite criticism from rights activists.
Tickets for the show – one of the biggest international gigs to be staged in Harare in years for years – were said to have sold out within minutes of concert being confirmed.
Rights activists however, said the gig, which was held at the 3,500-seat Harare International Conference Centre, was inappropriate, considering the situation in the country.
“It’s inappropriate at this moment in time for international musical icons to perform in Zimbabwe,” Dewa Mavhinga, a senior researcher at Human Rights Watch, said ahead of the show.
“It might send the wrong message that Zimbabwe has come right and there is a basis for international co-operation to resume when there is not. Zimbabwe is going backwards.
“We must avoid … the impression that all is now fine in Zimbabwe and it is business as usual.”

Adams’s manager, Bruce Allen, defended the concert. “Bryan is an international artist with a worldwide audience, whether it is Pakistan or Vietnam or Zimbabwe,” he told Canada’s Globe and Mail newspaper.
“To paraphrase what he has said over the course of his 30-plus-year career, everywhere he goes, kids wanna rock. Music will, I hope, always remain a universal language.”Advertisement