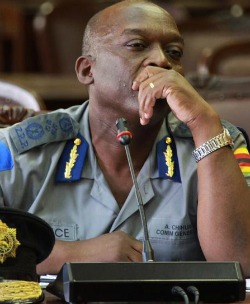 IN a scene reminiscent of how Judas Iscariot accompanied the riot police to arrest Jesus Christ in the garden of Gethsemane, on Friday 30 May, Zimbabwe anti-riot police, in the company of Apostolic Christian Council of Zimbabwe (ACCZ) President Johannes Ndanga, visited Madzibaba Ishmael-led shrine seeking to enforce a ban on the church for alleged abuse of women and children.
In a scene also reminiscent of how Peter tried to defend Jesus Christ through a sword, the persecuted sect, in turn self-organised and assaulted the riot police, who fled the scene. This case, which has now been highly satirised represents a classical example of the interplay between religion, politics and the rule of law in Zimbabwe, while the self-organisation of the sect to confront state excesses is the spontaneous rise of the proletariat against state power, which we allude to in our previous article ‘Re-thinking strategy on the Zimbabwean crisis’.
While, Zimbabweans feel that every allegation of abuse by churches, especially where children are involved, should be investigated for all perpetrators to be brought to book, there is a strong sentiment that the police’s conduct was disproportionate, not above board and politically motivated. The Budiriro case highlights the complicated history of the church and the ruling Zanu PF that is characterized by both a dark and soft underbelly. Firstly, the government has used the church’s soft underbelly to introduce their political doctrine in to the church and secondly, the church has in turn largely supported political hegemony through a selective application of the scriptures, which represents a dark underbelly.
This latest episode follows the case of Nolbert Kunonga, the former Anglican Bishop of Harare and Mashonaland in Zimbabwe who, from 2005 until recently, perpetrated gross human rights abuses in the name of God, with impunity and state protection. It also follows various cases which include: how the ruling party has manipulated the apostolic sects to advance their political agendas, how they have used civilian institutions such as schools and teachers to advance their party ideology, the recent case of Gumbura who was convicted of abuse of church women, but who in his defence stated that he was falsely incriminated for various political reasons since he preaches polygamy in his church and some of those who are opposed to his teachings have instigated the current rape charges’. During his sentencing, the Magistrate made disturbing statements that the state should supervise churches and their doctrines.Advertisement