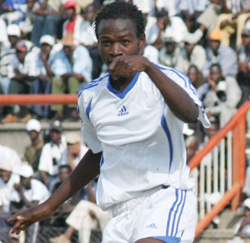 BUFFALO Junior became the fourth team to be promoted to the Castle Lager Premiership after winning the Eastern Region Division One league on Sunday.
Buffalo thumped Mwenezana 3-1 through a double from Vincent Makaha and former Soccer Star of the Year Evans Chikwaikwai to seal their place among the country’s big guns for the 2015 season. They finished with 67 points.
Mutare City finished second with 65 points despite beating Gutu Leopards 3-1 on Sunday.
Buffalo, who will play their league matches at Vhengere Stadium in Rusape, join Tsholotsho (Southern Region), Flame Lily (Northern Region) and Hwahwa (Central Region) in the top flight.
Chiredzi from the Eastern Region, Bantu Rovers (Southern), Black Rhinos (Northern) and Shabanie Mine (Central) were the teams demoted from the PSL at the end of the 2014 season.
Advertisement