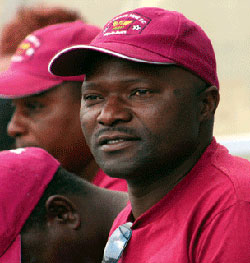 HOW Mine have been presented with an opportunity to top the Castle Lager Premier Soccer League when they clash with a demoralised Buffaloes at Sakubva Stadium in Mutare on Thursday.
The Bulawayo side is fourth on the standings with 18 points from 10 matches and could move to 21 if they beat Buffaloes on Thursday.
Leaders Highlanders have 20 points and are only in action on Sunday against Triangle in Chiredzi.
Buffaloes, on the other hand, lost 3-1 and 1-0 to Highlanders and Black Rhinos in their last two matches mainly due to poor morale in camp as players have not been paid their signing on fees and salaries for the last four months.
The Mutare-based side used to enjoy sponsorship from diamond mining company, Mbada Diamonds, but the deal was not renewed this year.
Coach Luke Masomere has threatened to quit before but has stayed on after persuasion by the team’s leaders, but the results have not been coming. They are ninth on the log with four wins, four losses and two draws.
On the other hand, How Mine are unbeaten in eight matches but dropped two points in last weekend’s 0-0 draw against Harare City in Bulawayo.
On Saturday, unbeaten ZPC Kariba welcome Chapungu to Gwanzura.
ZPC have won two and drawn eight games and that has put the pressure on coach Saul Chaminuka to get three points from this home encounter. But it won’t be easy as Chapungu are coming from a morale boosting 3-0 win over Caps United.
FC Platinum, unbeaten in their last two matches after thumping Triangle 4-0 and drawing 1-1 against Highlanders, return to Mandava to face Black Rhinos.
Moses Chunga’s bottom placed Chiredzi are off to Bulawayo to face inconsistent Chicken Inn.
Chiredzi is embroiled in leadership struggles and were on Wednesday summoned by the PSL in a bid to resolve their problems after Chunga quit over the weekend before reversing his decision on Monday.
On Sunday, Dynamos are off to the Colliery to face Hwange, a team which thumped them 4-2 in their last trip there last season.
Troubled Caps United will be at home to Shabanie Mine, hoping to recover from last week’s hammering by Chapungu.
Leaders Highlanders take on Triangle at Gibbo Stadium in a match that could decide the fate of the hosts coach Biggie Zuze, who was given a one match ultimatum on Tuesday after four losses on the trot, which has left them in 14th place.Advertisement