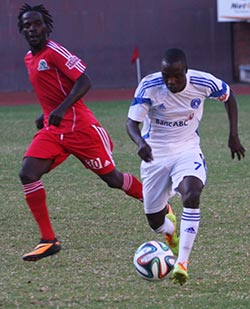 Dynamos 0-1 Buffaloes
DYNAMOS’ woes can only get worse.
On their return from a midweek loss to Chapungu, fans were expecting an immediate response, but Luke Masomere has perfected the art of beating Dynamos in the last two seasons and did that with a first half goal to earn three points.
This was Dynamos’ second loss in a row leaving them perched in eighth place on the league table, three away points from leaders Highlanders who crushed Caps United 4-0 at Barbourfields.
Last season, Shabanie beat Dynamos 4-2 on penalties in the BancABC Super Eight semi-finals in Bulawayo and even before Sunday’s match, Masomere had stated that he had plan for the defending league champions.
Roy Mwenga scored the priceless goal that pushed Buffaloes to fourth place on the log standings and, try as they evidently did, the defending champions were simply off colour.
Dynamos started with the usual two strikers, Washington Pakamisa and Anesu Gondo, and the chances came, but they could not convert.
Tafadzwa Rusike created some space after being sent through, but hit the side netting and it all looked like Dynamos were on their way to find an opener.