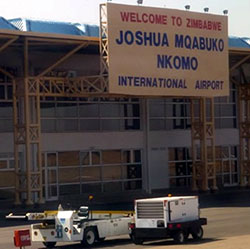 MORE than $13 million is needed to complete upgrades at the Joshua Nkomo International Airport in Bulawayo despite the project taking over a decade and gobbling $25 million, the Civil Aviation Authority of Zimbabwe chief executive, David Chawota said on Monday.
The airport was commissioned in December last year but the terminal has been undergoing upgrades for over 10 years at a cost of more than $25 million.
But Chawota told officials touring Victoria Falls Airport that more money is needed to upgrade security and build a control tower. There was also need to expand access roads and replace the hanger which was destroyed during construction.
“We need an additional $14 million for upgrades at the airport. The good thing is that the airport is operational so the upgrades can be implemented while people are getting a good service,” he said.
Transport minister Obert Mpofu said the Victoria Falls International Airport, which is undergoing a $150 million Chinese-funded refurbishment will be commissioned in August next year.
He said the terminal building was now 43 percent complete while the runway was at 73 percent.
The new-look airport would handle more than 1,7 million passengers annually, up from the current 500,000 and would process wide-bodied aircraft.
The expansion work is being carried out by China Jiangsu and funded by China Exim Bank.Advertisement