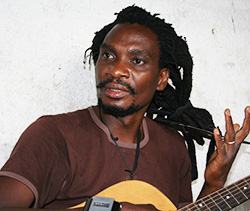 BULAWAYO visual artist, Owen Maseko, suffered another setback Friday after the National Art Gallery in Bulawayo pulled down his latest exhibition under unclear circumstances.
Maseko is not new to controversy after his Gukurahundi themed ‘Sibathontisele’ art exhibition was banned by the State.
He was again the victim of censors Friday after the director of the Bulawayo-based state gallery reportedly ordered that the exhibition be taken down, a day after it opened to the public.
The gallery’s director Voti Thebe, according to sources was miffed by the exhibition – a ten piece exhibition titled Kwacha – because it was sexually explicit.
Thebe could have been uncomfortable with allowing the exhibition run, after government a few years ago ordered the removal of a giant sculpture, Looking Into the Future, which was said to be sexually explicit.
Maseko reportedly confronted the gallery staff on Friday after discovering that the art pieces had been thrown out.
“The pieces were not about nudity but it was a human figure that tried to depict that both males and females are equal.
Everything went well during the official opening but the following morning Thebe ordered that the exhibition be pulled down,” said the source.
The source said what could have further enraged Thebe was that visitors were allowed to scribble their thoughts using a piece of chalk next to the pieces.
That could have made him take the decision to pull it down due to what some people were writing.
In an interview, Maseko expressed disappointment at the latest development.
“The exhibition, to me, meant something new, exploring new avenues and getting experimental stretching my creativity as much as I can,” he said.
He added: “But I was really disappointed in him and I think he took it too personal because I don’t think my work was too controversial to a point where it deserved to be dumped outside the gallery.”
Maseko said he was not sure if it was the government which was using Thebe to censor his new works.
In April the Supreme Court order Maseko to pull down his Gukurahundi inspired paintings at the Bulawayo Art Gallery, five years after the exhibition was banned.
The exhibition, titled ‘Sibathontisele’ (Lets Drip on Them), consisting of three installations and twelve wall paintings briefly opened at the gallery in March 2010 before state authorities, who have suppressed public debate around the 1980s massacres, shut it down.Advertisement

Maseko together with Thebe, were arrested by police. Thebe was later set free.