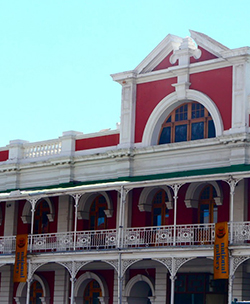 THE National Art Gallery in Bulawayo is set host an art exhibition in honour of the country’s independence celebrations.
Zimbabwe celebrates its 35th year as an independent country on Saturday, April 18.
The exhibition titled Phindu Phenduke (Come Back Again) will be open to all artists throughout the country.
It is meant to engage the nation to revive the spirit of Ubuntu/Unhu, by celebrating cultural diversity and shared history, further enriching the nation’s cultural heritage and tangible visual culture.
Artworks that include painting, drawing, sculpture, installation, photography, video, performance, design, craft, sound and any new media, will be considered.
The main exhibition will run at the gallery from April 30 to May 24.
“The exhibition is expected to make statements concerning our social developments, environmental surroundings and cultural inheritance,” said exhibition curator, Clifford Zulu.
“What does the Zimbabwe independence mean to you?  Phindu Phenduke is a commonly used name in Bulawayo that describes the country’s annual independence celebrations held since 1980, it translates to (come back again).
“The definition of the word independence, in this context, implies a tradition, inheritance, legacy, culture and customs or one’s visual perspective of Zimbabwe’s independence.
“Phindu Phenduke will aim to be seen as a contemporary guide for creative modernisation and growth driving to preserve cultural archives of the country’s inventive activities in the post-independence Zimbabwe, over the passage of time.”
The exhibition will include a broad range of competencies from the fields of art and design, the jurors will be selected accordingly.
“The jury will nominate 3 artists for 1 award: The National Solo Award. The award recognise overall artistic quality and relevance, and will be granted on the opening day of the exhibition.
“The solo award will be submitted in the 2015 National Arts Merit Award (NAMA) and accompanied by a Free NGZ membership subscription for 2015 and trophy,” said Zulu.Advertisement