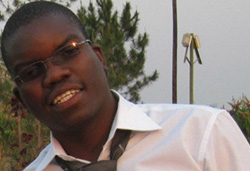 BULAWAYO based author Crispen Ndlovu recently found a live bullet in his letter box at his home and immediately alerted his lawyers.
Ndlovu recently released a new political satire novel titled Sleeping with the Enemy, which focuses on the Government of National Unity (GNU) era where the ruling Zanu PF party, shared power with the opposition MDC parties.
The fictional work, which is based on true political accounts, also focuses on the marginalisation of Matabeleland regions by the Zanu PF administration.
Ndlovu believes the latest antics are a reaction to his latest project.
The author, who has had a brush with the law for his controversial works, is also the author of Guveya (2013), a political satire which cast the spotlight on the 1980s Gukurahundi atrocities.
In 2016, the author and photo journalist went into hiding after suspected members of the Central Intelligence Organisation (CIO) visited his home.
“I received a live bullet in a brown envelope in the letter. The envelope was half tucked into the letter box and, when I opened, I found a bullet. I have since contacted my lawyer,” said Ndlovu.
“I have not made a formal complaint to the police since all my previous complaints have never been handled, including three assaults by the police and all matters were referred to Inspector Khisimusi who told me that he concluded his findings and sent them to Harare.”
The writer however, insisted that he would not be cowed into silence by the scare tactics.
“It is a tactic used by dictators the world over to try and silence the voices of the masses but I will continue standing for truth and justice through my books and journalism.
“It is definite that my new book, Sleeping With The Enemy, has touched some areas that some people never want exposed like the abduction of activists, military involvement in the running of this country, state sponsored violence and massive corruption done at government level,” said a defiant Ndlovu.
Meanwhile, Tineyi Mukwewa of Abammeli Lawyers for Human Rights confirmed receiving the report and said he is yet to meet Ndlovu to decide on the course of action.
“We will assist him to make a police report that he has received such a threat and then from there the relevant authorities who are the police should then start investigating,” said Mukwewa.Advertisement