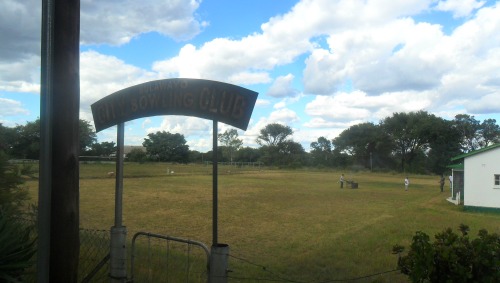 MOST Lawn Bowl clubs in Bulawayo have been abandoned and are in a dilapidated state.
Three of the city’s bowling clubs Raylton, Bulawayo City Bowling and Parkview Bowling clubs are all in a sorry state with the greens having disappeared. At the National Railways of Zimbabwe (NRZ) owned Raylton Bowling Club long grass has taken over. The club house is now being used for selling sadza.
The situation is also bad at the Bulawayo City Bowling Club which used to be ranked as one of the best greens in Africa.
“Since Bulawayo City Bowling was bought by a local businessman several years ago, the greens have disappeared and the club house is now used for selling beer. This really pains my heart because the greens used to be well maintained and were one of the best in Africa,” said Inos Mutongwizo who is one of the only few black bowlers in the city.
The chairperson of the Matabeleland Bowling Association, Denis Streak said bowling greens are very expensive to maintain.
“Bowling lawns are very expensive to maintain .You need specialised lawn machines and special fertiliser to maintain the greens. The greens also consume a lot of water,” said Streak who owns Good hope Bowling Club in Inyathi.
Streak’s club used to be patronised by commercial farmers in the area before their farms were taken over by the government during the land invasions. Streak said his association is encouraging black people especially youngsters to play bowling.
“Although bowling facilities are very expensive to maintain, the game itself is not expensive to play. Everyone can afford to play it and my association is prepared to assist individuals or organisations willing to participate in the game,” said Streak.
He added that the game is comparatively a simple sport to play, yet vibrant, dynamic and exciting, suitable for young and old alike, the physically fit or physically challenged.
Whilst bowls has its roots on grass played outdoors, use of synthetic surfaces is rapidly increasing, both outdoors and indoors. Facilities may be specially constructed or transportable mats used both outdoors and indoors.
To get started, the basic equipment is the level playing surface, foot mats and target ball (jack). Individuals would require flat soled shoes and a set of bowls (four bowls in a set, each weighing around 1.5kg). Advertisement

The object of the game is to get one or more of your team’s bowls closer to the jack (a little white or yellow ball) than your opponents. Each game has a specified number of “ends” and the winning team is the team that has accumulated the most points in the game. Games can be singles (one player per team), pairs (2 players per team), triples (3 players per team) or fours (4 players per team). The number of bowls per player is determined by the number of players per team.
Bowls are not round but have a “bias” so they run in a curved line. One side of the bowl is “weighted” (the bias) and the curve goes towards the bias. Each set of bowls has an individual serial number and an identifying logo. As well as different sizes of bowls there are bowls with different biases that make their travelling path wider or narrower.
A bowling green is divided into rinks which are 4.3 to 5.8 metres wide and 31 to 40 metres long. There are usually 6 or 8 rinks per green.
Each player has a position on a team; the lead plays first, then the second, followed by the vice (third) and finally the skip. The skip is the person who directs the play during the game. As with all sports, there is a set of rules to be followed. The Laws of the Sport of Bowls is published by World Bowls and is regularly updated.
Bowls can provide you with open air exercise, comradeship, improved mental and physical facilities. Standard competitions normally last around 3 hours per match but some can be shorter.
Bowls can be played at any level of competition, from socially to the highest levels of international competition. All persons are able to participate, so long as the bowl can be hand held and delivered.