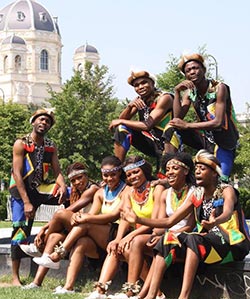 BULAWAYO City Council has turned down a request by a group of artists to use the White City Stadium for free to promote local artists through a music concert.
In a letter to the municipality, the artists said the event, dubbed Buy Local Concert, is meant to prop up local artists who have played second fiddle to visiting South African and Harare-based colleagues.
They said so bad is the situation that the so-called seasoned artists from Bulawayo are routinely used as supporting acts for Harare-based colleagues such as Winky D, Oliver Mtukudzi and Jah Prayzah, among others.
The local-based artists rarely host any live shows as some rarely command a huge following, a case of prophets being disowned by their own people.
To make a living out of art, some of the artists have either relocated to the capital or moved to countries like South Africa to pursue their dreams.
The artists were hoping the city council would hear their plea and offer them the venue for free.
“We would like to host the Buy Local Concert on the afternoon of the 30th of April 2016 at White City Stadium.
“Many a times artists have tried with no luck to host events that sell local acts, mostly because of lack of support from locals (Both corporate and fans).  When a foreign act or an act from Harare are in the city, local businesses jump in to assist and because of that support our local people jump in to the train in their numbers.
“Two good examples will be the Jah Prayzer shows at Amphi Theatre and the Kalawa Show at Queens which both had little local representation but high numbers in terms of attendance (December 2015 shows),” the letter read in part.
However, the artists acknowledged that local audiences could be shunning due to shoddy products.
Some of the artists who had been billed to perform at the planned event are Jeys Marabini, Sandra Ndebele, Clement Magwaza, Khuliyo, Vocal X, The Outfit and Iyasa.
“We are kindly asking for support in three areas, which are:  White City Stadium, Publicity Material for the event and stage hire for the event. The participating artists will contribute to get the sound and instruments for the event and also market the event.
“Local companies like Ingwebu Breweries and other local companies who should be on top of their markets will be considered first for partnership,” read the letter. Advertisement

In response, council said the artists should pay for the venue, as they will be making money through gate charges.