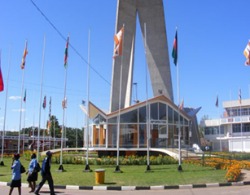 THE 55th edition of the Zimbabwe International Trade Fair (ZITF) kicks-off in Bulawayo Tuesday with a number of local and foreign exhibitors participating.
By Monday evening, the ZITF grounds were a hive of activity as most companies were putting final touches on their stands while others are expected to arrive Tuesday.
Groups of Chinese, Congo-Brazzaville delegates, Indonesians businesspeople and Zambians were also spotted busy offloading their wares as they arrived at the ZITF grounds.
A representative on the Congo-Brazzavile stand, Arts director, Oscar Aveline confirmed that the Congo-Brazzaville delegation was expected to arrive in the afternoon by yesterday.
President Mugabe will officially open the premier trade showcase on Friday, a day before the show ends.
The theme for this year’s ZITF is “New Ideas to New Heights – Progress through Innovation”.
On Tuesday, there would be an International Business Conference where Vice-President Joice Mujuru would be one of the guest speakers.
One of South Africa’s Unica group of companies sales director, bid Qasim at the South Africa Embassy stand was upbeat about their participation this year’s show during an interview with NewZimbabwe.com.
“As you can see, we are only left with some few touch-ups,” he said, “We are absolutely ready to go and we hope that everything will go well.
“This is our third time showcasing our products in the country. We had a lucrative market for our textile, plastic and steel products in Zimbabwe. We have clinched some business deals in Bulawayo and Harare in the past three years, hence our interest for coming for the fair is lucrative.”
Ali Bali, the Head of Economic Affairs, who was at the Indonesian Embassy stand said they were looking forward to a great show and expected to clinch more business deals at the show.
“We have been here every year for the Trade Fair. We have a good market in Zimbabwe for our agricultural, textile and cosmetic products and we do expect to clinch more deals for this year’s show,” he said.
ZITF Company marketing and public relations manager, Stella Nkomo said at the moment they cannot pre-empty anything before the press conference which is expected to be addressed by the Minister of Commerce and Industry Tuesday.
Most of the exhibition space has been taken up with a number of international exhibitors from China, Indonesia, Malawi, Mozambique, Namibia, South Africa and Zambia ready to participate at the fair.Advertisement

Other foreigners are from Botswana, Kenya, Brazil and Iran.
Although the current Zimbabwean story is one of a collapsing industry and a distressed business, the overwhelming uptake of space this year speaks a different story amid strong suggestions this could be a better show than those of